a Godly thought...
If we despise our brother our worship is unreal, and it forfeits every divine promise. (p116 Bonhoeffer) 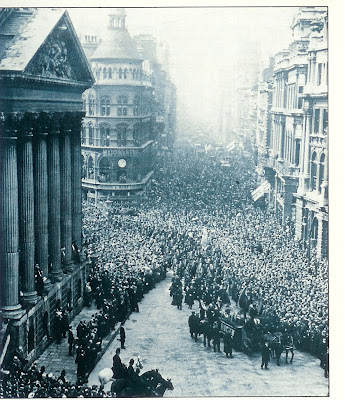 a Dave thought...
This picture above captures the enormity of William Booth's funeral in August 1912. It is reported that 150,000 mourners filled the streets that day and all the leading figures in the world sent their messages of sympathy.

King George wrote: Only in the future shall we realize the good wrought by him for his fellow creatures. Today there is universal mourning for him. I join in it.
Queen Alexandra, the Queen Mother, who also sent a wreath of flowers from the royal gardens at Sandringham, wrote: Thank God, his work will live for ever.
The Emperor Wilhelm II of Germany explicitly commanded that a wreath should be placed on the coffin by Baron von Bulow. A wreath was also received from King George and Queen Mary. King Christian of Denmark sent a message, as did President Taft of the U.S.A.

A few years ago I conducted my first funeral and it was the result of a methadone overdose by a mother (33yo) and daughter (15yo) it was an incredibly sad story of wasted lives and a lot of rejection, there were 12 people in attendance that day.

Funerals in a small way lets the world know what impact a life has had on a community. William Booth did have a massive impact and it has a lot to do with his words at age 15 that he prayed and lived out consistently... God shall have all there is of William Booth.