a Biblical thought...
He also said, "This is what the kingdom of God is like. A man scatters seed on the ground. Night and day, whether he sleeps or gets up, the seed sprouts and grows, though he does not know how. (Mark 4:26)

a Book thought...
Learning is a relational process - something done within the context of community and real-life ministry, not simulation. We learn as we go. (p70 Logan & Miller) 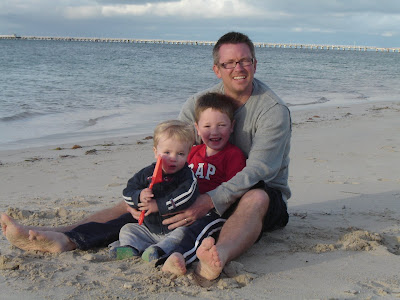 a Dave thought...
It was great to get away to Busselton for the last couple of weeks on holiday with my family. This town located 230km south of Perth is on the ocean and is famous for having the longest jetty in the southern hemisphere. The 1.8km jetty was very attractive to our family and we walked it most days and ended up catching a crab there on the last night.

As Kylie's parents were stationed there as COs in 1973 it was great to revisit her birth place and drop into the local corps on the Sunday. Captain Scott Smallcombe is doing a great job and although the congregation is small it has doubled over the last 12 months and the future is looking bright. When we stepped in the door at 10am on Sunday the first words I heard were "you must be a Collinson" which was then followed by the same lady commenting to my wife "and you must be a Hamilton". It is amazing being able to drop into most Salvation Army Corps across the territory and be recognised as children of officers of which we both value our heritage, but then again it would also be good to just be a first generation Salvo and sometimes just visit anonymously.

Just a thought.
Posted by Captain Collo at 6:08 AM