a Biblical thought...
For through the law I died to the law so that I might live for God. I have been crucified with Christ and I no longer live, but Christ lives in me. The life I live in the body, I live by faith in the Son of God, who loved me and gave himself for me. (Galatians 2:19-20)

a Book thought...
When communicating across generation gaps an unresponsive audience haven't necessarily rejected the substance of the message - just the style of its communication. Visual and verbal are both required in a multimodal, prove-it, walk-the-talk culture. (p211) 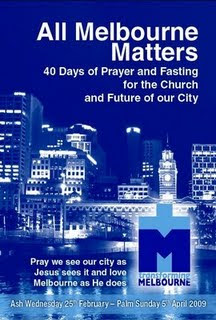 a Dave thought...
Here are some stats and quotes I thought were worth posting from All Melbourne Matters (Feb 2009)...