a Biblical thought...
Now to him who is able to establish you by my gospel and the proclamation of Jesus Christ, according to the revelation of the mystery hidden for long ages past, but now revealed and made known through the prophetic writings by the command of the eternal God, so that all nations might believe and obey him—to the only wise God be glory forever through Jesus Christ! Amen. (Romans 16:25-27)

a Book thought...
The principle goal of education is to create men who are capable of doing new things, not simply of repeating what other generations have done - men who are creative, inventive and discoverers. (p97) 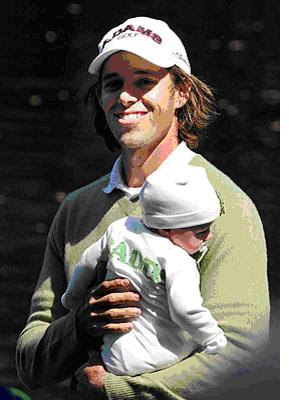 a Dave thought...
Yesterday I was fortunate to spend a few hours at the Pro-Am at Kingston Heath. As a golfing fan to see the amazing Tiger Woods up close was a dream come true, but it was spending some time with Aaron Baddeley that was most impressive. Aaron is a committed Christian and is more vocal than any other sportsman I know about his faith. At 28 years of age he still mentions how much God helps him on the world circuit as a professional golfer. As I have met Badds before I was able to chat with him for some time yesterday after his round. He grew up attending Careforce a Church of Christ in Mt. Evelyn, Melbourne and today goes to a local church where he now resides in Arizona with his wife. He also currently attends a weekly PGA bible study group which has over 50 professional golfers attending and leads it regularly.
In an interview featured in The Australian yesterday...
"Things aren't as important, little trivial things you used to worry about," Baddeley said.
"For me, being a Christian, it really gives me a small idea of how much God loves me.
"It doesn't matter what sort of day you had -- good or bad, on or off the course -- you come home and Jewels is so happy to see you.
"It's awesome. At the end of the day shooting 75 isn't that big a deal."
Even the nappy-changing seems to have struck a chord.
"I am getting pretty quick at that," the 28-year-old said. "Life is great. I have been very blessed -- great family, great wife and great daughter. She's a great little girl.

If you check out his web page http://www.badds.com/ he also has a whole section about faith, a bible reading plan and how to use SOAP as your personal devotions. It is great to see such an outstanding young man in the professional sporting scene. Play well Badds, I'm praying you will win the Masters this weekend!

Just a thought.
Posted by Captain Collo at 5:57 AM