a Biblical thought...
This is how much God loved the world: He gave his Son, his one and only Son. And this is why: so that no one need be destroyed; by believing in him, anyone can have a whole and lasting life. God didn't go to all the trouble of sending his Son merely to point an accusing finger, telling the world how bad it was. He came to help, to put the world right again. (John 3:16-17) 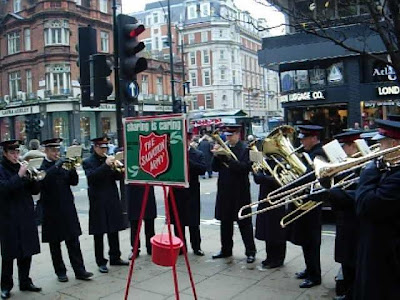 a Dave thought...
Years ago I began playing at a yearly Christmas celebration at Burwood Special School where I met an amazing boy. Jamie is partially blind and physically handicapped but loves music, especially the brass instruments. Ever since that first interchange I have come across Jamie on numerous occasions at shopping centres and other caroling events. He will stay and listen sometimes up to an hour and request Jingle Bells & Silent Night with incredible enthusiasm.
The other day while walking through Forest Hill Chase, as I was wearing my uniform I ran into Aaron, the father who recognized me as the carolling Salvo, we had a few words as he was keen to hear the band again. So I gave him my card and let him know he was welcome any Thursday night at 8pm to come and listen to the Box Hill Band.
Well last night I was on my way to band rehearsal when I received a phone call. It was Aaron wondering if he could still come along with his son to listen to the band, I said he was most welcome and sure enough he arrived fifteen minutes later and enjoyed it very much. I’m not sure whether they will come along again but I do know that music is powerful and regardless of our outward appearances it has an amazing impact on our souls. Although Jamie was a little noisy at times it was great to have him at rehearsal and his presence certainly made my night.

Just a thought.
Posted by Captain Collo at 5:55 AM