a Biblical thought...
As he said this, he showed them his hands and feet. They still couldn't believe what they were seeing. It was too much; it seemed too good to be true. (Luke 24:41)

a Book thought...
The majority of early Salvationists were also socially insignificant people. It was intended that they should be. The movement was for the poor. (p101 Needham) 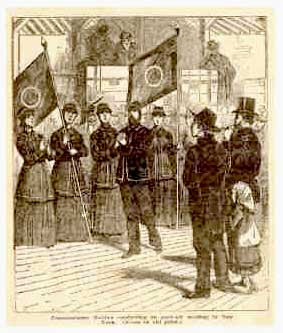 a Dave thought...
One of the values that I believe we as Salvos need to emphasise once again is getting out of our churches and going to the people. It is no coincidence in my mind that when we stopped doing open-airs over the last 10 to 20 years has also been the era that we have declined. I'm not saying lets necessarily bring back the open-airs but at least we need to make an effort every week to get into the community and share Jesus with people. Instead of replacing this outreach activity it seems we just sleep in more.
I understand amps don't come with wheels and generators but unless we think of creative ways to get out of the church and share the gospel we will continue to decline.

Just a thought.
Posted by Captain Collo at 5:38 AM