a Biblical thought...
"So why are you now trying to out-god God, loading these new believers down with rules that crushed our ancestors and crushed us, too? Don't we believe that we are saved because the Master Jesus amazingly and out of sheer generosity moved to save us just as he did those from beyond our nation? So what are we arguing about?" (Acts 15:10-11)

a Book thought...
Instead of us toiling and labouring for God and him feeling indebted to us for our good service, we have the shocking image that he owes us nothing. We are unworthy servants. We have only done our duty. (p90 Frost) 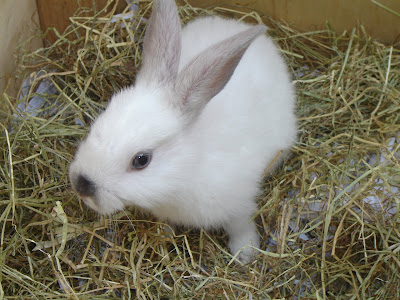 a Dave thought...
Yesterday was the big day, yes you guessed it the day we purchased our first rabbit. Noah has been wanting one all year so we promised him that once he turned six we would purchase one for him. So we made the trek out to Wantirna and after much deliberation Noah chose 'Snowflake' a six year old dwarf rabbit. In the car on the way home he decided not to disown Snowflakes heritage so named him 'Rex Snowflake Collinson'.
At this stage I can't fault my sons commitment to making Rex a part of the family and he even got a mention in prayers at the meal table last night. So if you are ever wanting to spend $20 that will give you nonstop family entertainment and responsibility I recommend adopting a small furry carrot eater.

Just a thought.
Posted by Captain Collo at 8:24 AM