Our hope for the future

a Biblical thought...
People come up and tell us how you received us with open arms, how you deserted the dead idols of your old life so you could embrace and serve God, the true God. (1 Thes 1:9) 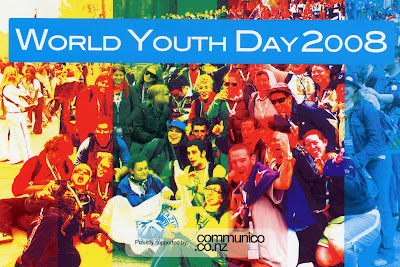 a Dave thought... by Denis Hart - Catholic Archbishop of Melbourne
World Youth Day is the largest youth event on the planet - and the Pope's arrival means it's here. The event in Rome, in 2000, attracted two million pilgrims. Four million people attended the final mass in Manila in 1995.
Melbourne has hosted more than 22000 young people from across the world. Whatever can be said about the World Youth Day instigated by John Paul II, it does brings in the crowds.
Pope Benedict XVI attended his first World Youth Day as pope in 2005 in Cologne when 1.2 million people attended the final mass. World Youth Day is much more than the economic benefits identified by government. Our world's youth are our hope for the future.
At World Youth Day they come together and are inspired to make the world a better place.
WYD re-enforces in our pilgrims a reason for hope and the challenge and command to love as Christ loves. Our capacity for both is limitless.
Through sermons, lectures and public addresses pilgrims are told human kind can and must eradicate the poverty and suffering we see. They are told that the family is a great institution one that must be protected and nourished, and that life long commitment between a man and woman in marriage is possible.
As I am heading up to the WYD tonight it is good to read what the Catholic leaders are hoping to achieve out of this event. Many of the themes you read here would be much the same if The Salvation Army were to run a similar event. Also interesting how a poll by social networking giant MySpace brands the Catholic Church "out of touch" with young people. The online poll, which targeted Australians aged 14 to 24, found 77 per cent of respondents felt the church was out of touch with them. Hopefully us Salvos would get a better result, but maybe if we face the facts we are also sometimes out of touch ourselves.
Just a thought.
Posted by Captain Collo at 6:57 AM