a Biblical thought...
The first thing I want you to do is pray. Pray every way you know how, for everyone you know. Pray especially for rulers and their governments to rule well so we can be quietly about our business of living simply, in humble contemplation. This is the way our Savior God wants us to live. (1 Timothy 2:1-2)

a Book thought...
The anxiety of choice means that we are always comparing and often regretting the choices we have made. (Sayers p67) 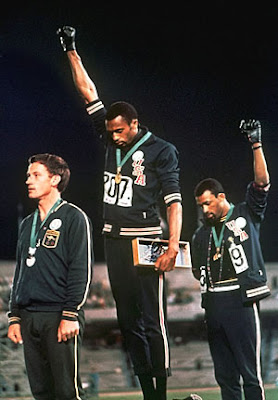 a Dave thought... http://www.salutethemovie.com/
The Age review states... Rarely has the ability of a documentary to utterly transform one's appreciation of a historical event been so superbly harnessed as in Matt Norman's extraordinary film about the "black power" salute given at the 1968 Olympic Games in Mexico City - and about the remarkable Australian scrupulously sidelined by his own country's history.
On the winners' dais after the men's 200-metre final, Americans Tommie Smith and John Carlos defied protocol by raising their fists to signal to the world the racial tension ripping through the heart of the US. The image became an iconic gesture of defiance and pride.
The third man on the podium was silver medallist Peter Norman, the director's uncle. Though he did not feel it was his right to salute, Norman was deeply involved in what occurred. He, too, was troubled by race relations back home. He had become friends with his competitors and wore a badge in support of their cause.
For that, Norman would be punished for the rest of his life. Australian officials diligently set about ensuring that he be blackballed from anything that brought him recognition, whatever the cost to the country. Despite representing a strong chance to take out his event at the 1972 Olympics in Munich, Norman was denied a spot.

I have had a few people recently tell me that this film which has just hit our cinemas is simply "a must see". As Peter Norman was a Salvationist from the Thornbury corps there are several mentions of his faith and upbringing in the Salvos throughout the 92 minutes. There is footage of the Salvation Army Thornbury band marching up High Street, and it also states the fact that Peter found out he could run at Sunday school picnic running races. It has had outstanding reviews, but more than that to have a young Australian Salvo man stand up for the oppressed on such a public way back in the late 60's is certainly worth a look. Don't miss it!
Just a thought.
Posted by Captain Collo at 6:31 AM

I can't wait to go see this movie. Maybe we should go next week for cell...