a Biblical thought...
When the teachers of the law who were Pharisees saw him eating with the "sinners" and tax collectors, they asked his disciples: "Why does he eat with tax collectors and 'sinners'?"
On hearing this, Jesus said to them, "It is not the healthy who need a doctor, but the sick. I have not come to call the righteous, but sinners." (Mark 2:16-17)

a Book thought...
Theories are linear; people are not. We need to keep that in mind as we create paths for spiritual growth and development. (P52 Logan & Miller) 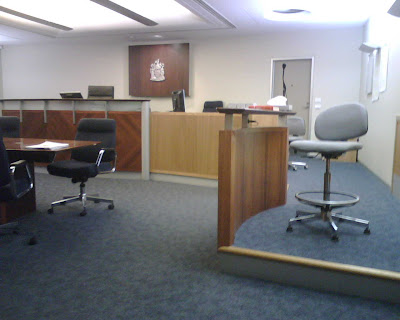 a Dave thought...
Yesterday was a first for me in the fact that I was required to appear at Ringwood Magistrates Court. At the beginning of the year I was driving and as I attempted to call a friend back on my mobile phone, and although it was on blue tooth, I had to hold my phone in my hand to dial the number, it was at that 15 second moment when the Senior Constable pulled up next to me at the lights and suggested we have a little meeting on the side of the road. I was consequently fined $149 and would lose 3 demerit points.

Later in that week I attempted to put in writing my case and have the matter dismissed but that resulted in a letter that ordered me to appear in Court on Friday 24th October. Well although it was intimidating I was given some sound advice by some court workers who suggested I plead guilty and say the following words to the magistrate: Your honour, I ask that you consider dealing with this matter under section 76 of the sentencing act and finding it proven and dismissed. Well the magistrate in Court 1 showed much grace and the case was dismissed and I was not required to pay the fine or lose points. There are some fights worth fighting maybe this was not one of them but it is good to know there are others besides Jesus that believe in grace.
Just a thought.
Posted by Captain Collo at 5:39 AM

I hope you had the chaplain there to support you.

David,
More than a little hypocrisy being shown in this one. I guess contravening the law and acknowldging one's guilt doesn't count for much these days. As a leader integrity of profession and lifestyle go together. May be it is time to remind yourself that you are accountable to God who watches, sees, cares and judges. Integrity is just as indespensable on the road as it is on a blog. May be a return to the court and admission of guilt would be a good outcome. GHB

Davo,
Could not agree more with GHB. You openly admit to break the law but are not willing to take the consquences. Seems expecting integrity in leaders like yourself is somewhat naive. There seems to be a real inconsistance between what you say and what you do. It is only when our lives speak authentically to a sceptical world that the wolrd will listen. Graham

Captain Dave,
Looks like you need a lesson on integrity and the connection between Christianity and morality. What you did has badly let the side down.

hey man thanks for the tip on how to break the law and get away with it.. HH

I am sorry I must also agree. I have just been through a similar scenario with my teenage son and much to my joy he has taken responsibility for his actions. It has meant some inconvenience to him but he has a clear concience and can now move on

David,
Where to now - having admitted to manipulating the system to one's own advantage raises a question: is what you've done in keeping with your values? Another question is are you going to do as most bloggers do and simply ignor what has been said or are you going to provide a reply that says you got it wrong on this one? James

Those in positions of leadership need to be seen to practise high principles and live by the highest standards of honesty, integrity and credibility. How do you know if someone is credible; how can credibility be defined in behavioural terms; and how do you recognise credible leaders are also important questions? Think of a leader or someone in your life who you think has integrity. What does that mean to you?
In answering such questions what often stands out is most people can only name a handful of people who they believed had the goods. But they could remember plenty of instances where integrity was absent and spoke of the resultant damage to themselves, others and the organisation. The greatest fallout from a lack of integrity is the loss of trust in institutions, and individuals.
Going by what you say in this blog it would seems that there is a lack of coherence between what you often say and what you actually do, so why should anyone listen to you let alone take your seriously. When Christian leaders fail to live with integrity the fallout is deadly serious. Not only does it destroy trust, it betrays the cause of Christ’s gospel and dishonours the God we serve
We know from personal experience that almost everyone respects and admires integrity when we see it. We have no hesitation in asserting that this one quality, truly understood and faithfully exercised, can transform the work of leaders, contribute to our personal bottom line, strengthen the work of the Army and support Christian witness. You are right it was not an honorable fight and even less a grace outcome. I trust that integrity has not become an old-fashioned virtue. WJE

Come on posters! Sour grapes? Pot calling the kettle black? Jealousy? Hypocrasy? Where do I start.

Why do Christians so often seem to think that integrity only comes when we do something wrong AND pay the full price? That's not logical. The two aren't inextricably linked.

He did something wrong. He went to court. He admitted guilt. He asked for leniency. He got it. He even blogged about it rather than hiding it.

But somehow that doesn't sit well with you lot. You are crying for blood. Why wasn't he punished! Where's the justice! He lacks integrity! Our nature is to complain about people not receiving full measure for their crimes, and yet we happily accept that Jesus doesn't require the same from us. If he did, a fine here on earth would be the least of our worries...

So how does he lack integrity? Seems like jealousy because you've probably just paid your fines. You took it on the chin, like a man (or woman). Why doesn't he? And you somehow see Dave as lacking integrity because he asked for mercy. Interesting...

Does admitting guilt necessitate punishment to the full measure on earth? What about in heaven? I'm glad God doesn't think so. - NY

had to check the blog after being present in court on the day...

ouch. tough audience... Magi Lenny should've given u $140 in advance as recompense for the public rebuking from punters with an opinion, and then, fined u $140 for photographing a courtroom. now that is against the 'rules' :P

just out of interest, a question to the moral elect... what life's like up there?!

Where are all those stones when I need them?

To all the 'moral elect' (LF) you obviously neglected to read Dave's blog fully. Dave did plead guilty, and so acknowledged he did the wrong thing. What he said is commonly used in court across the state on a daily basis. So GHB, Graham, Dave, James, Anonymous, WJE lets see if you can acknowledge your guilt.
Peter Limo

Congrautlations Dave on admitting your guilt in court.

I agree with you that it's nice to see someone other that Jesus showing grace and mercy. Though it doesn't appear that many others have shown you the same thing after reading the responses to your blog.

I would like to think I am a person of integrity. However, I think that maybe at least once in the past week, I drove over the speed limit (though I didn't get caught). So maybe as some of the others, who it would seem have never broken the law, suggest that you are a person of no integrity, I must be right there with you!

Maybe I should have realised this sooner. The only perfect person to walk the earth that I've ever known of was Jesus, right?

Looks like some missing the point. Yes none of us are perfect, I don't think that was the issue. The issue seems to be deliberately choosing to use the phone in the first place,and then seeking ways to get out of it, which compounds the wrong. The country is trying to educate us all about the dangers of driving and using a mobile phone. Surely its about time we all got on board instead of defending the indefensible. GH

Like the drink drive add: If you use your mobile phone while driving you're a b.... idot.

what about the rest of us who talk on our phone and don't get caught!