a Book thought...
Pre-Christians are looking for God, not for a successful church. Church leaders who believe that building the perfect church will attract pre-Christians do not yet understand the culture that confronts them. (p82) 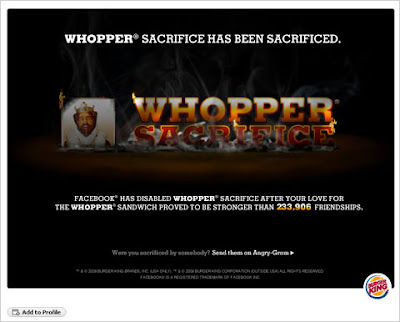 a Dave thought... from The Age
While many trivial actions prompt Facebook to post an alert to all your friends — adding a photo, changing your relationship status, etc — striking someone off your list is not one of them.
It is this policy that Burger King ran afoul of this month with its "Whopper Sacrifice" campaign, which offered a free hamburger to anyone who severed the sacred bonds with 10 of the friends they had accumulated on Facebook. Facebook suspended the program because Burger King was sending notifications to the cast-offs letting them know they'd been dropped for a sandwich (or, more accurately, a tenth of a sandwich).
The campaign, which boasted of ending 234,000 friendships, is history now — Burger King chose to end it rather than tweak it to fit Facebook's policy — but the same can hardly be said of the emerging anxiety it tapped. As social networking becomes ubiquitous, people with an otherwise steady grip on social etiquette find themselves flummoxed by questions about "unfriending" people: how to do it, when to do it and how to get away with it quietly.

Just a thought.
Posted by Captain Collo at 12:10 AM