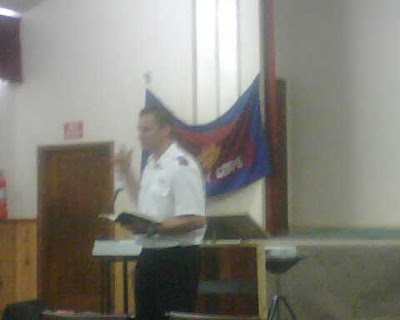 a Dave thought...
It was good to have the opportunity to worship at Torquay Salvos yesterday with our friends & session mates Captains Phil & Catherine Abram. This corps plant on the surfcoast has grown considerably over the last few years and to see it in action was inspiring. This church offers so much for the community with Kids church being held in two different age groups, there was also a creche, as well as a morning tea and chat for all the adults at the end of the service. Phil was really personable as he shared the word and challenged us all to deny ourselves, his story of fasting coffee for lent and as part of his sacrifice towards OWSOMS was inspiring but made addicts like me feel guilty. But on reflection perhaps it is good to feel guilty sometimes.

Just a thought.
Posted by Captain Collo at 6:57 AM