a Biblical thought...
Pray that our God will make you fit for what he's called you to be, pray that he'll fill your good ideas and acts of faith with his own energy so that it all amounts to something. (2 Thes 1:11)

a Book thought...
Individualism fosters an impatience with people and institutions; we can always join another church, find new friends, or get another job. (p43 Sayers) 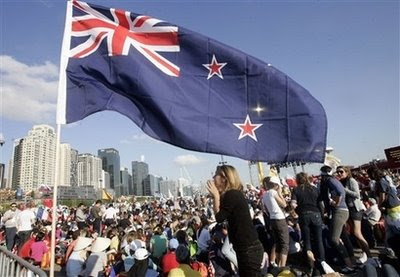 a Dave thought... from The Age
Pope Benedict XVI warned Christian leaders Friday that the push to unite Christian churches was at a "critical juncture" and called on people of all religions to join together against violence.
The pontiff, leading hundreds of thousands of Catholics in World Youth Day celebrations in Australia, was speaking at separate meetings with leaders from other Christian denominations and other religions.
"I think you would agree that the ecumenical movement has reached a critical juncture," he told around 50 Christian clergy, "We must guard against any temptation to view doctrine as divisive and hence an impediment to the seemingly more pressing and immediate task of improving the world in which we live," he said.
The head of the world's 1.1 billion Catholics was speaking to senior clerics from denominations including the Anglican, Catholic, Lutheran and Uniting churches.

The Christian Church does spend a lot of time and energy disputing doctrine, it seems more and more denominations arise because of our individual differences when it comes to the way we interpret the gospel. I'm with the Pope, lets stop looking for how we differ but rather what we have in common, we all love God & others and want to improve the world. So lets unite and go forward together.
Just a thought.
Posted by Captain Collo at 7:04 AM