Marching as to War

a Biblical thought...
Don't grieve God. Don't break his heart. His Holy Spirit, moving and breathing in you, is the most intimate part of your life, making you fit for himself. Don't take such a gift for granted. (Eph 4:30)

a Book thought... from The Heart of a Leader by Blanchard
Feedback is the breakfast of champions. (Tate) 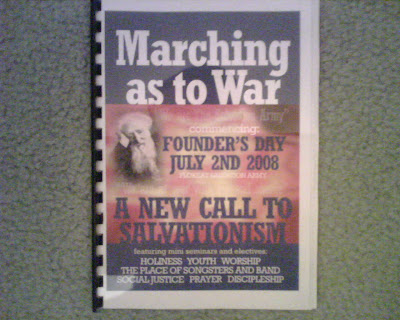 a Dave thought...
Last night was the opening service for Marching as to War, a mini conference held at Floreat Park Corps in Western Australia. Major Iain Trainor gave the message from Acts 2 and he reflected on the fact that Jesus was a revolutionary person while he lived on this earth, and William Booth attempted to do the same. He left us with challenge that unless we connect with a revolutionary God and have the Holy Spirit in us The Salvation Army will never reach its potential in these days. God did raise up The Salvation Army and I believe it is not time to turn the lights off yet.
What also grabbed my attention last night was a 20 year-old guy called Joel I met just briefly. As we were having tea together I discovered that he is a very successful 400 metre runner who is on track to be part of the Olympic team in 2012. The reason he wanted to come last night was to sing the Founder's song O Boundless Salvation. So at the conclusion of the meeting he got his wish as we sang the whole 7 verses together as a benediction. I think this Army may tick on for another 143 years with its amazing heart for God and people, its just going to take on a different look.
Just a thought.
Posted by Captain Collo at 8:12 AM