a Biblical thought...
When she finds it, she calls her friends and neighbors together and says, 'Rejoice with me; I have found my lost coin.' In the same way, I tell you, there is rejoicing in the presence of the angels of God over one sinner who repents." (Luke 15:9-10)

a Book thought...
There are two pains in life, both can cause suffering, but one moves you forward while the other sets you back. They are Discipline and Regret. (p32 Cordeiro) 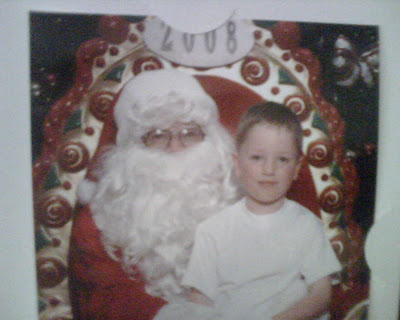 a Dave thought...
This is a picture we had taken of our son Noah with Santa on Saturday at Northlands shopping centre. Although I'm not a big fan of the whole line up and get your photo taken thing we thought it was a surprising request worth honouring as Noah had spent the first four years of his life screaming and running away from the white bearded man.

After the photo a few words were exchanged between Noah & Santa and then I had a pleasant surprise when Santa wanted to speak to me. Obligingly I engaged in conversation with the man as he came over and he told me I had special boy of which I then responded "why?". "Your son just told me that on Christmas Day he is going to church because the real reason for Christmas is about baby Jesus being born". Santa was quite taken aback and I presumed he had a faith to make the effort to walk over to me amongst the queues and chaos.

So Christmas 2008 Noah has moved from Sleigh Santa to save Save Santa. It hasn't been often I've been proud to be the parent of two boys in a shopping centre, but on Saturday even though it cost $15.95 for the photo I think it was worth it.

Just a thought.
Posted by Captain Collo at 5:58 AM