a Biblical thought...
"The Holy Spirit will come upon you, and the power of the Most High will overshadow you. So the holy one to be born will be called the Son of God. Even Elizabeth your relative is going to have a child in her old age, and she who was said to be barren is in her sixth month. For nothing is impossible with God." (Luke 1:35-37)
a Book thought...
You never know how long you have to show love to people in your life. Life is fleeting and fragile. (p205) 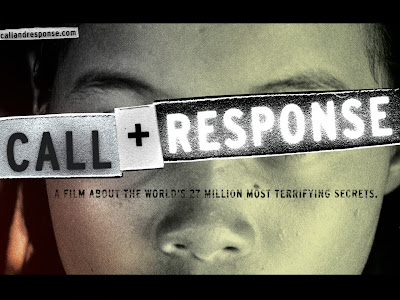 a Dave thought...
Yesterday I was given the opportunity to see a pre-screening of the new film CALL+RESPONSE. It tells the story of the disturbing fact that human trafficking continues to grow across the globe but in a unique way as musicians express themselves through their lyrics and take action against this growing degrading industry. Look out for the release in Australia on October 22nd and make sure you make the effort to get along, or better still take your youth group or congregation along. An amazing production about a sad reality.

CALL+RESPONSE is a first of its kind feature documentary film that reveals the world’s 27 million dirtiest secrets: there are more slaves today than ever before in human history. CALL+RESPONSE goes deep undercover where slavery is thriving from the child brothels of Cambodia to the slave brick kilns of rural India to reveal that in 2007, Slave Traders made more money than Google, Nike and Starbucks combined. www.callandresponse.com.au

Music is part of the movement against human slavery. Dr. Cornel West connects the music of the American slave fields to the popular music we listen to today, and offers this connection as a rallying cry for the modern abolitionist movement currently brewing.

Just a thought.
Posted by Captain Collo at 5:24 AM