a Book thought...
Some of the dreams in the second chair have to be closely aligned with those of the first chair because of the organisation wide impact. (p146) 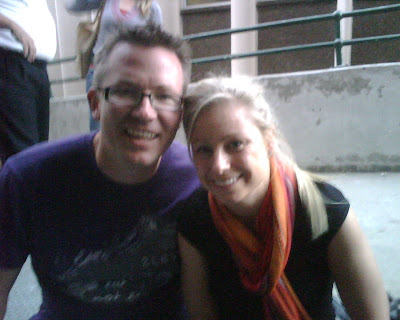 a Dave thought...
Alisa Camplin OAM (born 10 November 1974 in Melbourne, Victoria) is an Australian aerial skier who won gold at the 2002 Winter Olympics. At the 2006 Winter Olympics, Camplin finished third, a bronze medal. She is the first Australian to win medals at consecutive Winter Olympics. Alisa competed at the Olympics against doctors' advice – she had injured herself after being caught by a headwind in training a few weeks before. At the time, she was told she had bone bruising, it wasn’t until she was examined by doctors in Salt Lake that she discovered both her ankles were fractured. The doctors were amazed that she was walking, let alone planning to jump.

It has been another great day with all delegates going on day trips and having heaps of fun. Tonight at INSANE Live it was pleasure to have Alisa join us as well as Ex-Collingwood footballer Paul Licuria and Physcologist Michael Carr-Gregg they all added some great thoughts on how to reach your dreams and improve your life.

Posted by Captain Collo at 2:02 AM