a Biblical thought...
You must obey my laws and be careful to follow my decrees. I am the LORD your God. Keep my decrees and laws, for the man who obeys them will live by them. I am the LORD. (Lev 18:4-5)

a Book thought...
Not only did Jesus shape that early community, but he also was shaped by them. (p60) 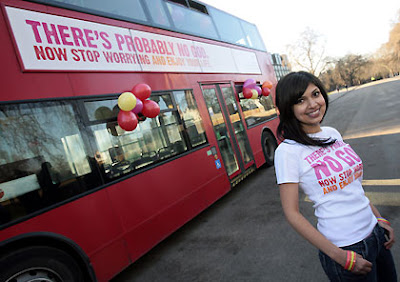 a Dave thought... from The Age
THE Atheist Foundation of Australia has lodged complaints of religious discrimination in Melbourne and Hobart after being refused permission to put atheist advertising on buses.
The AFA raised $16,000 from donations to put signs on buses around the country saying "Atheism — celebrate reason". This followed a London campaign, backed by anti-religion campaigner Richard Dawkins, with signs on buses reading, "There's probably no God. Now stop worrying and enjoy your life".
But APN Outdoor, which handles bus advertising in all metropolitan cities except Hobart and Darwin, declined the advertising and refused to give any reason, AFA president David Nicholls said yesterday. Nor would Metro Tasmania in Hobart accept the ads, he said.
A complaint was lodged with the Anti-Discrimination Commission of Tasmania late last year. In Melbourne, AFA member John Perkins emailed a complaint to the Victorian Equal Opportunity and Human Rights Commission on Tuesday.
"Legally atheism counts as a religion, though we say we're not one," Dr Perkins said.
Mr Nicholls said it was an issue of freedom of expression.
APN's general manager of marketing, Paul McBeth, said public buses were owned by state governments, who stipulated in agreements with APN that any advertisement that might offend the community was not permitted on public buses.

It is interesting the mixed messages people are given everyday of their lives. As some groups like the Salvos attempt to share the hope and love of Jesus with everyone we come in contact with, we have other organisations like the AFA who totally want people to dismiss the idea that there is a God at all. Sad but true.

Just a thought.
Posted by Captain Collo at 6:55 AM

Speading love and helping people is by no means solely the province of christian groups.