a Biblical thought...
Jesus said, "I tell you the truth, this poor widow has put more into the treasury than all the others. They all gave out of their wealth; but she, out of her poverty, put in everything—all she had to live on." (Mark 12:43-44) 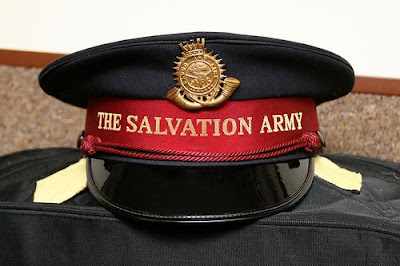 a Dave thought...
Dick Collett passed away peacefully at Box Hill Hospital on Sept. 12, 2009, aged 91 years, 11 months. Much loved and devoted husband of Myrle (dec.). Loving father and father-in-law of Alan and Katina. Dear Pa of Allison and Stewart and Sonia and Scott and special Papa of Kaja, Jesse, Jordan, Jaimee and Gabriel. Reunited with Mum now in God's care.
When I stand in Glory, I shall see His face, And there I'll serve my King forever, In that Holy place.
I met Dick many years ago when I first attended Preston Salvos in 1988, he played horn in the band and was one of the most encouraging guys I ever met. Dick would always let me know how welcome I was at the Corps and would always greet me with a massive smile and warm handshake. I soon learnt that Dick was not just a nice guy but had time for everyone. He was so genuine in his way that he cared and loved people in the Kingdom. He was also responsible for starting an outpost in West Preston where he lived and literally introduced hundreds of people to Christ through this ministry. Dick was an amazing guy, an incredible example of what it means to be a Salvationist, but most of all one of God's own who had an incredibly positive influence upon everyone he met.
If you have time today at 1pm (EST) you can watch the funeral service live of Envoy Dick Collett at www.Rivustv.com/funeral.php
Just a thought.
Posted by Captain Collo at 7:19 AM