a Biblical thought...
It's well known that God isn't at the beck and call of sinners, but listens carefully to anyone who lives in reverence and does his will. (John 9:31)

a Book thought...
Our actions are also like pulling a thread out of a sweater - it's just one thread, but it will change the appearance of the sweater, and possibly even unravel the entire garment. (p135 Munn) 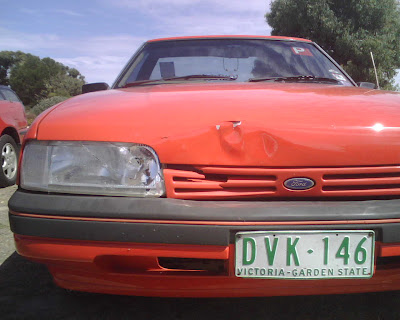 a Dave thought...
Our family is curently at Anglesea, a couple hours from Melbourne helping at RAW camp, where 60 youth from Box Hill are gathering for the weekend. Last night began literally with a bang as Tim one of the leaders hit a kangaroo on his drive into the camp and caused $1000+ damage to his Ford ute.
As part of my contribution to camp I was one of several asked to lead a session on the seven deadly sins, I chose gluttony. It was great to discuss and debate with the youth the over indulgence of food that takes place in our culture and look at some of the history.
Thomas Aquinas went so far as to prepare a list of six ways to commit gluttony, including:
•Praepropere - eating too soon
•Laute - eating too expensively
•Nimis - eating too much
•Ardenter - eating too eagerly
•Studiose - eating too daintily
•Forente - eating too fervently
My conclusion is that I still believe it is a sin but somehow it never seems to get the same attention as other sins like drunkeness, adultery or even envy even though it is often easier to identify those that partake in gluttony. But as Thomas suggests if we lack self control when it comes to our eating habits we most likely lack self control in other areas of our life.

Just a thought.
Posted by Captain Collo at 1:41 PM