a Book thought...
Don't allow any trapping of this world to lure you into slavery and idolatry. Don't let food rule your thoughts and your life. Don't let sleep stop you from spending time in prayer and getting things done. (p184 Munn) 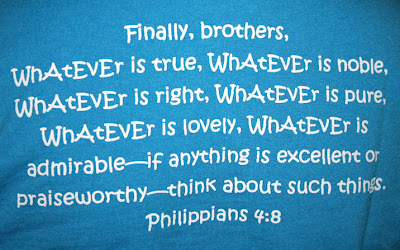 a Dave thought... from The Sunday Age
A study released in January found that almost a third of Australians aged 13-17 were non-believers. The three-year national study of spirituality among 1219 young people found that 31% had no religious beliefs. While almost half identified themselves as Christian, only 17% regularly practised their religion - almost as many who professed to New Age beliefs such as reincarnation and astrology.
But Professor Ruth Webber, co-author of the Spirit of Generation Y study, says many of those who identified themselves as non-believers still professed faith in the existence of a vague, indefinable spiritual being looking over them.
"We called them to ourselves the 'Whatever Generation' - if you want to believe in God, whatever; if you want to believe in miracles, in New Age stuff, fine, whatever suits, there are many different routes and paths to God," she says.

These statistics demonstrate the way spirituality is heading with our teenagers. There are less and less young people in Australia who are practising Christians and with so many religions and options to explore spirituality many would say ''why just stick to what the majority believe or their parents believe?" So as our young people explore there is no use trying to stop them but rather let us disciple the teenagers we come in contact with so they understand and experience a God who loves them as He died for the whosoever, rather than just whatever.

Just a thought.
Posted by Captain Collo at 5:28 AM