a Book thought...
One of the primary laws of human life is that you become like what you worship; what's more, you reflect what you worship, not only back to the object itself but outwards to the world around. (p195 Wright) 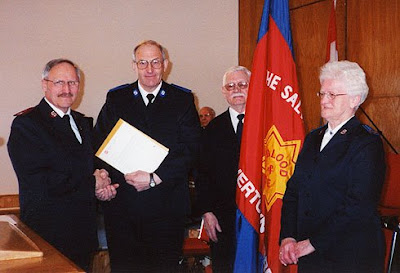 a Dave thought...
Corps Sergeant-Major: The chief local officer for public work who assists the corps officer with meetings and usually takes command in their absence.
It is interesting to see how many Corps no longer have a CSM as part of their leadership structure. One of the strengths of The Salvation Army is that we have always known clearly who is second in-charge, as when the commander is absent or is struggling with an issue there has been someone to take over. As with all command positions there must be an assistant, such as Territorial Commander there is a Chief Secretary, Divisional Commander there is a Divisional Secretary, so a Commanding Officer of a corps needs a clear assistant. Unless the people of a corps clearly know who else to turn to in challenging times things will often get messy.
Just a thought.
Posted by Captain Collo at 7:21 AM

...interested to read your thoughts about the CSM role.

Best rank there is!

Sometimes the CSM just adds to the confusion! I guess getting the right person is just as important as having the right role.