a Biblical thought...
There is no time to waste, so don't complicate your lives unnecessarily. Keep it simple —in marriage, grief, joy, whatever. Even in ordinary things—your daily routines of shopping, and so on. Deal as sparingly as possible with the things the world thrusts on you. This world as you see it is on its way out. (1 Cor 7:29-31)

a Book thought...
Despite widespread opinion to the contrary, during his earthly ministry Jesus said nothing about his return. (p137 Wright) 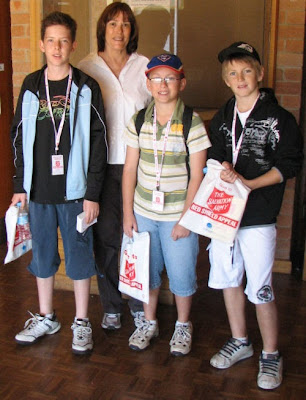 a Dave thought...
Call me unusual but I am one who actually enjoys door knocking with my Salvation Army uniform on. Yesterday I went out collecting for the Red Shield Appeal with my son Noah and had some amazing conversations, met great people, and received some generous donations along the way.

As I was team captain, I had to organise quite a few others so it was looking doubtful that I would be needed to actually knock at all, but when I finally got to my first house I was reminded once again why it is so valuable. This well dressed lady came to the door and once I had finished my usual blurb, she disappeared to get her $20. She then came back and started to share her story while I was filling in the fresh receipt book. She explained how her husband had just left for London to rescue their 34 year-old son who is an alcoholic, and due to liver failure is currently in medical care. We discussed the options of a rehab centre amongst others, and how she was hoping the Salvos might be getting involved to help her family. After a few minutes we parted ways and as I left heading for driveway no. 2 it was like God assured me to never stop this face to face contact, and that it was once again worth coming out today.

I soon realised I was having my best conversations when I took a long time to fill the receipt book out, but then would often get stuck at a house for 3- 5 minutes rather than the efficient 90 seconds when I was all pre-receipted up. So the dilemma for our movement was right before me personally -am I more interested in collecting lots of money and getting through my area as quickly as possible, or is it connecting with the people that really counts?

Just a thought.
Posted by Captain Collo at 6:11 AM

I think the latter of the two options you have mentioned. Even if it takes longer to get through your area aren't people, particularly people with problems they want to share more important. I always ask God Prior to going out collecting to lead me to someone who needs a word of encouragement or help in some other way and He never fails to lead me to such people. Yesterday was no exception.

Great stuff, Dave... When we do this face to face business we are mirroring the activity of God who is constantly drawing near to His creation. And I guess that's what Christlikeness is all about...

It also makes me feel better cause Ron collected much more than me this year... I too enjoyed the talks!

I'm with you Dave - I love a chat!! I had some great people who wanted to talk, and some lonely people too.

It's what we're all about isn't it? Showing Jesus through us to those who are lonely and sad.

Thanks for sharing your story i bet we all have a tale to tell from our collecting adventures. It was really great getting out their amongst the community our youth group thoroughly enjoyed ourselves and raised around six hundred dollars. We cant wait to do it again. from the Red Cliffs Youth Group. God Bless.