a Biblical thought...
Stay calm; mind your own business; do your own job. You've heard all this from us before, but a reminder never hurts. We want you living in a way that will command the respect of outsiders, not lying around sponging off your friends. (1 Thes 4:11-12)

a Book thought...
We now live in a time when consumer Christianity has become the accepted norm, and all-out engagement with and in Jesus' kingdom among us is regarded as just one option people may take if it suits them - but probably as somewhat 'overdoing it'. (p33 Sayers) 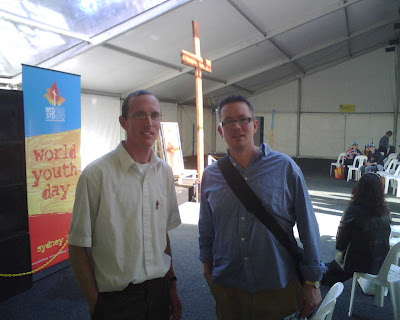 a Dave thought...
Best known now as the World Youth Day Cross, it also goes by the names the "Holy Year Cross", the "Jubilee Cross", the "Pilgrim Cross" and the "Youth Cross". It had its beginning in 1984, when celebrating the Holy Year of Redemption, Pope John Paul II desired that there should be a cross - the great symbol of our faith - near the main altar in Saint Peter's where it could be seen by everyone.
At the conclusion of the Jubilee Year Pope John Paul II closed the Holy Door, and the Cross, 3.8m high and 1.75m wide, that had made its home inside, was taken outside and entrusted to a group of young people to be carried out into the world. At that time more than 300,000 young people from all over the world had taken up the Pope's invitation to come to Rome for the Palm Sunday International Jubilee of Youth.
Since this time the WYD Cross has made its way around the world, throughout Europe, behind the Iron Curtain, and to parts of the Americas, Asia, Africa and briefly to Australia, being present at each international celebration of World Youth Day along the way. In 1994 the Cross began in earnest what has since become a tradition: its year long journey around the dioceses of the host nation of each international World Youth Day, as a means of prayerful preparation for the big event.

I found it fascinating yesterday to chat with Father David (pictured above) about the WYD cross and as he explained the history and significance it was once again reminded me about the power of symbolism. As we visited the tent which housed the cross, we saw many line up and take time to kiss the cross and then kneel and pray at the foot of this most loved symbol. Like most symbolism it is not until we understand the history and significance of the icon involved that we really appreciate what it means to others.

Just a thought.
Posted by Captain Collo at 8:21 AM

Hey Dave,
Did you know that Salvos - in full uniform - have carried that WYD cross? In the local newspaper and on the local telly, we saw the lovely Capts Martyn & Heather Scrimshaw involved int he procession at Leongatha township. A great show of solidary/unity for the Christians of that town.
Robyn Clinch

A great show of solidary/unity for the Christians of that town ..... or one step closer to the One World Church?

Refer to my post in the comments section yesterday. Interesting that there's been no response yet.

The high school that my boys attend had the opportunity to host the WYD cross for a short couple of hours. It was carried by christian students and police rangers. We held a memorial service to honour those of our community who had lost their lives in war, it was originally to be held in our community war memorial and peace park located at the school but due to wet weather had to be brought inside to the gymnasium. My son played the last post and rouse. We had opportunity to line up and touch the cross and pray. A young girl near me was asked if she was going to go and line up. Her response was "I am not Catholic so it doesn't apply to me." I was priviledged to be able to discuss with her that while the icon that travelled with the cross was indeed very catholic, the cross itself is for all believers. It is a symbol of the cross that the Lord Jesus died on. It was a very moving experience as myself and my 2 boys lined up and we touched the cross together and I prayed for them, our family and our school community. If anyone is wondering this is in fact a government school.