a Biblical thought...
When the disciples heard this, they were greatly astonished and asked, "Who then can be saved?" Jesus looked at them and said, "With man this is impossible, but with God all things are possible." (Matthew 19:25-26)
a Book thought...
God sees our life from beginning to end. He may lead us through a storm at age thirty so we can endure a hurricane at age sixty. (p106) 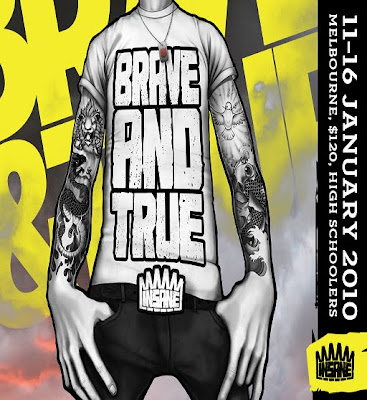 a Dave thought... http://www.insane.salvationarmy.org.au
Insane 2010 planning is well under way and after the great success of 09 where we had 619 young people attend we are again looking forward to another great event. But as we have began distributing the promotional material over the last week, we have received contrasting feedback about the male image above. From the Gen Y’s, our target market, the response has been very positive and one of the first comments is about how cool the belt buckle is. We have had also had enquiries about whether they will be on sale at the event! However our feedback from some the older generations has been quite the opposite with the use of tattoos in particular not appreciated. So for what its worth if you would like to comment on the appropriateness of this advertising campaign, it would be appreciated. Also if you can also put your age after your comment it will help our analysis. For the record 2Love was not going out to offend but just attempting to relate to a generation that continues to lose touch with an aging Salvation Army.

Just a thought.
Posted by Captain Collo at 7:28 AM

I like it lots! Put me down for a belt buckle.

It is what the generation you are targeting relate to.......we need to stop walking on egg shells and be radiacal FOR and with our young people.....perhaps I will get a tatt!!

Hey! I'm 19 and I think the poster looks great!
Insane's about reaching out to the youth and these days many of the youth are using tattoos to express their faith- they can relate to this picture.
Maybe the older generations need to ask themselves what's really important here- traditions and how 'things should be' or the new generation and how things could be!
Just a thought!

Your "target market" is Gen Y's? Interesting - sounds like you are trying to sell mobile phones. Also, with some definitions of Gen Z ginving them a start date of being born mid 1990's, it would seem you are inviting a lot kids to your event who aren't in your "target market".

Love the buckle, and motto on the shirt. Maybe the tatts are a little much, 1 or 2 would have been better, but it is what Gen Y relate to. 21yo

Benni Knop made a comment about your note "INSANE 2010 Poster":

Chris Green is a genius!

Graeme Mawson made a comment about your note "INSANE 2010 Poster":

Do each of the tattoos connect with something during the week? I think it looks great. I can see how kids in our local high school would be drawn to finding out more from the graphics.

Lynda Bosworth made a comment about your note "INSANE 2010 Poster":

I like think the poster is suitable for the event and the target audience....(I am a parental type!!)

Sean Attard made a comment about your note "INSANE 2010 Poster":

It looks SO cool.

Loving the lion and the dove.

Is the dragon a necessary feature? It looks cool, and I get it, but I just wonder if we need a dragon. I just don't want people spending all of their time talking about how much they want to physically abuse the devil - I want them meditating on how awesome the lion is, and how they can be more like Him. Also, the lion is like half the dragon's size.

I can't tell what's burning eternally on the dove arm. It looks to me like some kind of demonic carp. Don't hear me saying I'm not all for the vanquishing of demonic sea-life everywhere, my point/opinion is merely that the evil stuff is taking up way more space than the good stuff, and just... way more space than necessary at all.

Sean Attard made a comment about your note "INSANE 2010 Poster":

Out of pure interest, I googled 'brave and true salvation army' to see what happened (what if the slogan was some cool salvo reference and I just didn't get it!?)

'Brave and True is the story of the Band of the 2/22nd Battalion, their posting to Rabaul, and their ultimate tragic fate. Twenty three Salvation Army Bandsmen arrived at Rabaul with Lark Force; but only one came home to Australia... This book is about happy, healthy, talented Christian young men who answered the call of duty to their country.'

I hope the event is about happy, healthy, talented Christians who answer the call of duty to their Kingdom. That would be insane.

PS. Lion and dove t-shirt please. I will take seven.

Emily Davies made a comment about your note "INSANE 2010 Poster":

amen on the dove and lion shirts! but i think i just want the dove =]

Michelle Davies-Kildea made a comment about your note "INSANE 2010 Poster":

Love the poster Dave - although a female presence would make it even better - hope it all goes well! I'm not telling you my age - I think I'm a LITTLE older than you!

Love the buckle, and motto on the shirt. Maybe the tatts are a little much, 1 or 2 would have been better, but it is what Gen Y relate to. 21yo

Peter Lindstrom made a comment about your note "INSANE 2010 Poster":

Dave, a middle aged male here and I think it is great. At least it doesn't have squardrons of airplanes overhead.

Jess Foord made a comment about your note "INSANE 2010 Poster":

Does need a femenine touch to it!...if the tattoos have some sort of meaning to them that so awesome. Love it all. Im 17.
God Bless

I hope you will arrange for the Erik Leidzen cornet duet "Brave & True" to be featured at some stage during INSANE.

I absolutley LOVE this! ALOT. Cant wait for INSANE 2010. Its gonnna be mad as :D Brilliant!! Blessings x

Whatever happened to being in the world but not of it? Why do we have to lower ourselves to this? As Christians we can have fun without the use of evil pictures and hand signs. God wants us to be different - to stand out in the crowd not mingle in with it. How far away from pure and holy do we have to go? The devil will think its great as we become more wishy washy. Jesus was different!! That's surely what we should aim to be too.
I'm sure the actual camp would be great but you need to rethink your advertising as some parents won't send their kids based on this poster. I'm sure there are other exciting ways of advertising and appealing to this age group without stooping to using tattoos and evil hand gestures.
Please let's show the world that being DIFFERENT can be EXCITING and FUN!