a Biblical thought...
The answer, thank God, is that Jesus Christ can and does. He acted to set things right in this life of contradictions where I want to serve God with all my heart and mind, but am pulled by the influence of sin to do something totally different. (Romans 7:25)

a Book thought... from Surprised by Hope by N.T. Wright
Most people have little or no idea what the word resurrection actually means, or why Christians say they believe it. What is more worrying, this multiple ignorance seems often to be true in the churches as well. (p19) 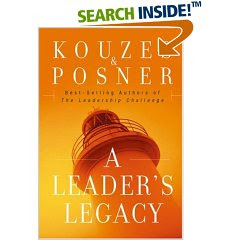 a Dave thought...
In twenty-one separate but related essays that comprise this volume, James Kouzes and Barry Posner share their thoughts about the positive and enduring impact that an effective leader can have. The nature and extent of each effective leader's legacy, of course, varies from one to another. While reading the Introduction and then the first few chapters, I began to think about great leaders throughout history such as Jesus, Abraham Lincoln, Winston Churchill, and Mohandas Gandhi. Obviously, there are differences between and among them and other great leaders in terms of when and where they lived, the circumstances in which they were born and raised, and the challenges they faced. However, all of them had a vision of what ought to be as well as an absolute faith that it could be fulfilled, they attracted the support of others who shared their vision and their faith, and they possessed what Bill George characterizes as "authenticity." Two excerpts:

Not a week goes by "that we don't hear someone in an executive role say something to this effect: `I don't care if people like me. I just want them to respect me." Get real! This statement is utter nonsense - contrary to everything we know about leadership...people perform significantly more effectively when their leaders treat them with dignity and respect, listen to them, support them, recognize, make them feel important, build their skills, and show confidence in them. Likeability is a major factor in being successful in just about every endeavor in life."

"You can leave a lasting legacy only if you can imagine a brighter future, and the capacity to imagine exciting future possibilities is the defining competence of leaders. Today's leaders have to be concerned about tomorrow's world and those who will inherit it. They are the custodians of the future, and it's their job to make sure that they leave their organizations in better shape than they found them. We've surveyed thousands of people on what they want in leaders, and their tell us that being forward-thinking is second only to honesty as their most admired leader quality...Get everyone involved in asking, What's next?...Another crucial question is, What's better? What's better than what you're now doing or anticipate doing in the foreseeable future?...It's imperative that we spend less time on daily operations and more time on future possibilities."

Honesty & forward-thinking are the two qualities people want to see in leadership. It would be interesting to see how The Salvation Army does on these two areas by surveying people inside and outside the movement. I am one who continually wants to cast a preferred future and know where we are heading, and believe unless we do so as an organisation we will continue to frustrate those who minister and work for us.


Just a thought.
Posted by Captain Collo at 6:04 AM

To be honest I am sick of people reading about leadership. Why can't they go to the next step and start training people for leadership? In almost every Corps I go to I hear the same thing - no one is being trained to take over leadership responsibilities. They have very few people in leadership roles because of this lack. Surely training takes in the vision side of things. Let's get on with the job instead of just reading all these wonderful ideas.