a Biblical thought...
Welcome with open arms fellow believers who don't see things the way you do. And don't jump all over them every time they do or say something you don't agree with—even when it seems that they are strong on opinions but weak in the faith department. Remember, they have their own history to deal with. Treat them gently. (Romans 14:1)

a Book thought...
What I am suggesting is that faith in Jesus risen from the dead transcends but includes what we call history and what we call science. (p83 Wright) 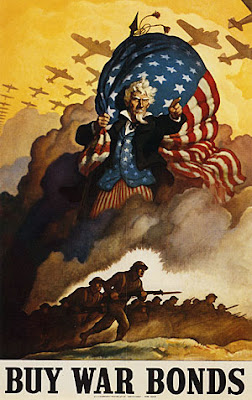 a Dave thought...
Uncle Sam is a national personification of the United States (US), with the first usage of the term dating from the War of 1812 and the first illustration dating from 1852. He is often depicted as a serious elderly man with white hair and a goatee, with an obvious resemblance to Presidents Andrew Jackson and Abraham Lincoln, and dressed in clothing that recalls the design elements of the flag of the United States—for example, typically a top hat with red and white stripes and white stars on a blue band, and red and white striped trousers.In 1941, in an effort to control inflation, the U.S. Treasury began marketing the new Series E Bonds U.S. Savings Bonds as "defense bonds". The government used the hype of the war to market the bonds to the country as a way to raise money for the war, when in fact they were used to take money out of the economy so inflation would not occur. The first one was sold to President Franklin D. Roosevelt on May 1, 1941, by Secretary of the Treasury Henry Morgenthau.[3] After the formal entry of the United States into the war in December of that year, these bonds became known as "war bonds".

The picture above, printed in 1942 is another that was sent to me this week in relation to the Revolution debate. I agree the imagery is very similar and although Uncle Sam was some guy, he certainly didn't have the same impact on the world as Jesus. By the way if you want to comment on this and to keep in vogue with past comments, I would like to encourage you all towards references to selling pets.

Posted by Captain Collo at 8:12 AM