a Biblical thought...
Convinced that no human being can please God by self-improvement, we believed in Jesus as the Messiah so that we might be set right before God by trusting in the Messiah, not by trying to be good. (Gal 2:16)

a Book thought...
Many Builders have faithfully served God in their churches, but it is often true that their children, grandchildren, and great-grandchildren are not serving God and are not comfortable in the churches that Builders enjoy. (p52 McIntosh) 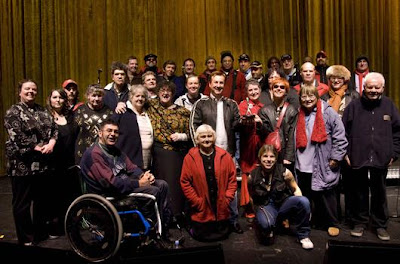 a Dave thought...
Yesterday I was fortunate to be involved alongside Jonathon Welch at the launch of the Winter Blanket Appeal at the ABC studios. Jonathon is the man who had a vision to gather the disadvantaged and marginalised homeless people of Melbourne together to form the Choir of Hard Knocks. http://www.choirofhardknocks.com.au/
The choir was formed in September 2006 but it was not until many of us weeped through a six week ABC documentary that we realised this was far more than another reality TV show. They have since gone on to produce two albums of which have sold over 110,000 copies. Earlier this year, the ABC documentary, The Choir of Hard Knocks won the Logie Award for Best Factual TV Series.

Jonathon says, “the formation of the Choir of Hard Knocks has given me the opportunity to use the musical gifts I have been blessed with and wonderful experiences I have had as a professional singer and conductor, to bring pleasure and a sense of belonging and self esteem to those who've joined this exciting new project.
“Choir of Hard Knocks also gives the audience and public at large an opportunity to see the other side of those who are disadvantaged and discover the powerful and moving stories of those who will be given a voice, in more ways than one. To be recognised, appreciated and applauded for what we do in life has to be the essence of any human being's sense of self respect and self worth.”

So it was a pleasure to be associated with Jonathon yesterday, as his example of using his passion and skills as a muso alongside his desire to see the homelessness valued has literally touched millions of lives around the country, but most of all the 50 members of The Choir of Hard Knocks.

Just a thought.
Posted by Captain Collo at 6:12 AM