a Biblical thought...
We're Christ's representatives. God uses us to persuade men and women to drop their differences and enter into God's work of making things right between them. We're speaking for Christ himself now: Become friends with God; he's already a friend with you. (1 Cor 5:20)

a Book thought...
Christian holiness consists not of trying to live as hard as we can to be good, but of learning to live in the new world created by Easter. (p266 Wright) 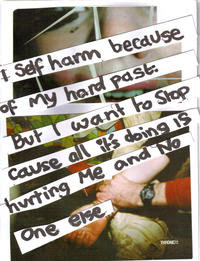 a Dave thought... from The Age
Figures released last week from the Australian Institute of Health and Welfare show that the number of young people presenting to hospitals with self-harm injuries - predominantly intentional poisoning and cutting - has grown 43% in the past 10 years.
According to the report, it is young women aged 15 to 17 who are mostly commonly admitted to hospitals with selfharm injuries. Indeed, the incidence of girls aged 12 to 24 ending up in hospital for selfharming has risen 51% in the past decade. In young men the increase has been 27%.

Research conducted by Professor George Patton at the Royal Children's Hospital Centre for Adolescent Health found that it was young people on a "fast track" to adulthood who were at greater risk of self-harm. This could mean young people who left school early, who were sexually active at an early age or who used drugs and alcohol.
"The early adopters of the adult lifestyle, those are the kids at the greatest risk," he says. "One perspective is that kids these days … have many more opportunities to grow up more quickly and they are growing up in a less protected way. It may be something to do with these changes with young people who are just … not well equipped to take on opportunities and challenges emotionally." Early intervention is crucial to treating self-harming behaviours, which may relate to deeper problems of anxiety, depression and trauma. Patton says the way youth mental illness is now treated in Australia has led to significant progress, although Coventry says services such as the Austin's are struggling to meet demand.

I have come across a few youth in recent days who are sadly apart of this growing trend. Our young people are under more stress than ever before and this is another sign that many are not coping and are crying out for help. Lets do our best to listen and help, as many are looking for another parent figure in their lives.

Just a thought.
Posted by Captain Collo at 6:12 AM

I believe we have a large number of young people who are growing up being the parent figures in their homes as their parents are opting out for various reasons ie drug/alcohol additction/ long working hours etc etc. It is not how life should be for these young people we can do so much in TSA if we are prepared to go past our comfort zone and love some of these seemingly unloveable young people. We have much to offer. There is a need also to educate our young people to be more open and accepting. My son tried to break into the youth scene at Box Hill Corps for several months no-one would even talk to him... I'm not being critical except that I think these young people need to learn to let others into their cirlce as they need to be there.