a Biblical thought...
"Don't think you need a lot of extra equipment for this. You are the equipment. No special appeals for funds. Keep it simple. And no luxury inns. Get a modest place and be content there until you leave." (Mark 6:8-10)

a Book thought...
I think in the past, the teaching on homosexuality in many churches has been somewhat shallow, quoting a few verses and no questions or discussion allowed. (p137 Kimball) 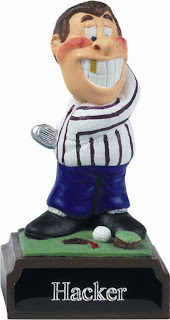 a Dave thought...
Yesterday afternoon I was involved in a friendly but competitive game of golf at Riversdale Golf Club. As we got down to the sixteenth hole the pressure was on and a short put was needed to be made to keep the match alive. Well the put was missed and the game was over, but what happened next intrigued me. As one who had been quiet became vocal and another who was vocal became quiet comments were made in jest but more about the person who had missed rather than the golfer who had made the put. It seems we like to mock the ordinary rather than lift up the excellent.
You see for some winning is everything yet for others it doesn't seem to matter. I am one who likes to win, and even when I try to just have a friendly game of cards with my son the competitive juices kick in. Even though I was very challenged by an anti-competitive sermon by Sandra Ryan a couple of years ago, I still believe it is a good thing to want to do the best at everything I take on as long as it is not at the expense of others.
By the way the person who missed the put also drove 330 metres but no one seemed to recall that feat.

Just a thought.
Posted by Captain Collo at 11:42 AM

Thanks David for your consistant daily thoughts - they're great.

The subject of homosexuality has challenged me of late too.

I have just finished reading the book "Loving Homosexuals as Jesus Would". It presents a challenge to all Christians and churches.

However, I am proud to be a Salvationist after reading the Army's "positional statement" on homosexuality.

God bless your work for Him