a Biblical thought...
The Pharisees and religion scholars were not pleased, not at all pleased. They growled, "He takes in sinners and eats meals with them, treating them like old friends." (Luke 15:2)

a Book thought...
The Salvation Army's strength has been the ability to respond quickly to missionary challenges. (p74 Needham) 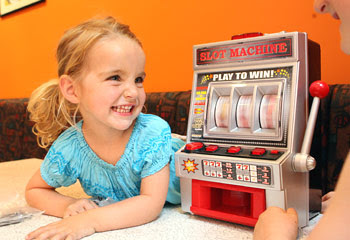 a Dave thought...
Lawyers say the Government must act urgently to address the gambling crisis which saw Victorians lose $2.5 billion last year.
Prime Minister Kevin Rudd last week expressed concern that gambling tax contributed more than $5 billion to the states' and territories' annual revenue.
The State Government is set to announce new 20-year poker machine licences within weeks — a once-in-a-generation chance to reduce the number and accessibility of gaming machines, according to Opposition gaming spokesman Michael O'Brien.
He said the State Government was ignoring "the social cost and the economic cost through the criminal justice system, through the health system, through the social welfare system that gambling addiction creates".
His views are backed by senior lawyers. Bernie Balmer, who represented Kate Jamieson, a former Bendigo Bank loans officer and a mother of two who stole $3.5 million to feed her gambling addiction and is now in jail, says poker machines are white-anting ordinary families.
The addiction to poker machines in Victoria continues to cost so many families so much more than just money. It is now taking lawyers and politicians to say we must reduce the number of gaming licences, surely we as a Salvation Army must be on the front line here speaking up for those families who continue to take the real hits from this billion dollar industry. So if not us - who? If not now - when?
Just a thought.
Posted by Captain Collo at 9:05 AM