a Biblical thought...
Don't burn out; keep yourselves fueled and aflame. Be alert servants of the Master, cheerfully expectant. Don't quit in hard times; pray all the harder. Help needy Christians; be inventive in hospitality. (Romans 12:11-13) 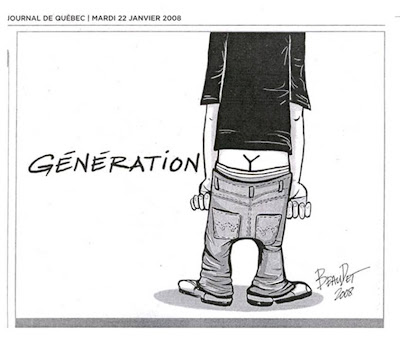 a Dave thought...
Gen Yers are those broadly aged from 6 to 31, born from 1977 to 2002. Unlike the generations that have gone before them, Gen Y has been pampered, nurtured and programmed with a slew of activities since they were toddlers, meaning they are both high-performance and high-maintenance. "Generation Y is much less likely to respond to the traditional command-and-control type of management still popular in much of today's workforce," says Jordan Kaplan, an associate managerial science professor at Long Island University-Brooklyn in New York. "They've grown up questioning their parents, and now they're questioning their employers. They don't know how to shut up, which is great, but that's aggravating to the 50-year-old manager who says, 'Do it and do it now.' "
"We are willing and not afraid to challenge the status quo," 23 year-old Kate says. "An environment where creativity and independent thinking are looked upon as a positive is appealing to people my age. We're very independent and tech savvy."
Unlike boomers who tend to put a high priority on career, today's youngest workers are more interested in making their jobs accommodate their family and personal lives. They want jobs with flexibility, telecommuting options and the ability to go part time or leave the workforce temporarily when children are in the picture.
Generation Yers don't expect to stay in a job, or even a career, for too long.They don't like to stay too long on any one assignment. This is a generation of multitaskers, and they can juggle e-mail on their BlackBerrys while talking on cellphones while trolling online.
And they believe in their own self worth and value enough that they're not shy about trying to change the companies they work for.

After attending a few conferences of late, it seems that it is not only the church that is trying to workout out how to cope with Gen Yers but also the Australian workforce. These guys are wanting more flexibility, more consultation and then when you give it to them there is no guarantee they are going to hang around. The challenge for us in a highly structured and controlling organisation, is to somehow relax a bit and listen to this generation. Sure it is going to get messy and its not how we've done it before, but unless we engage them and let them help shape our future there maybe will be no future at all.

Just a thought.
Posted by Captain Collo at 7:29 AM

Was just talking about Gen Y'ers today. I am one. She is one. Our discussion was about Gen Y'ers and church. How do we make it work? Even we have no idea. Where do you start? What do you do?
One huge problem with my generation is our understanding of committment, or, lack of it. Generally, it seems that if you turn up to church 1 or 2 sunday's a month, this means you are committed. I totally disagree with this idea.
One thing that my fellow Gen Y'er and I agreed upon was the fact that to have a vibrant relationship with God, we need to be in constant, daily communication, is a totally different level of 'committment' to what Gen Y'ers are used to.
One thing that is at least comforting with all of this information, is that if someone is in a growing vibrant relationship with God, they must truly mean it. This is not a generation of fakers.

For more on Gen Yers read "Generation Me" Jean M. Twenge. It is not all written for a Christian audience, FYI. Must read.