a Biblical thought...
Don't begin by traveling to some far-off place to convert unbelievers. And don't try to be dramatic by tackling some public enemy. Go to the lost, confused people right here in the neighborhood. Tell them that the kingdom is here. Bring health to the sick. Raise the dead. Touch the untouchables. Kick out the demons. You have been treated generously, so live generously. (Matt 10:5-8)

a Book thought...
If an organisation is to choose vigor over an ultimate state of inert uniformity, it must honour and support both the rational exploitation of success and the nonrational art of groping. 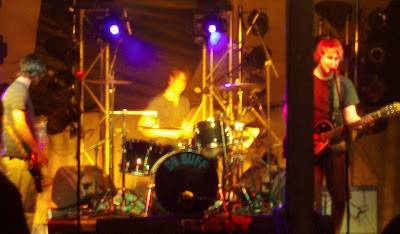 a Dave thought...
Black Stump has been running annually now for 23 years in New South Wales. This Christian music and arts festival has had an amazing impact on thousands of young people especially on the fringes of the church. I was privileged to have coffee with Fuzz Kitto today one of the founders of the festival and one of Australia's leading experts on youth work. His observations with the festival over the years are fascinating. It is no longer just about young people or just a couple of denominations but a gathering of a whole lot of sub cultures from many denominations across three generations. He also noted that now when the delegates register for the festival and it asks for them to note their local church some now just write Black Stump. You see as the organisational Church has failed to connect with many people today, gatherings such as these help some to connect with God unlike any other community.

Just a thought.
Posted by Captain Collo at 2:32 PM