a Biblical thought...
And they chanted night and day, never taking a break: Holy, holy, holy Is God our Master, Sovereign-Strong, The Was, The Is, The Coming. (Rev 4:8)

a Book thought...
Missions is less about the transportation of God from one place to another and more about the identification of a God who is already there. (p87 Bell) 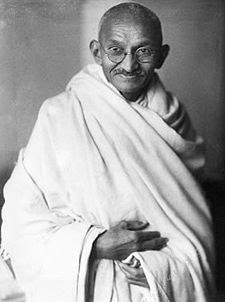 a Dave thought...
Mohandas Gandhi, one of the most influential figures in modern social and political activism, considered these traits to be the most spiritually perilous to humanity…

Ghandi was an amazing man, I still remember watching the Richard Attenborough movie about his life when in high school and was moved by the fact that one humble person could have such an impact on the world by engaging in civil disobedience. These seven traits still stand today, and in our western culture as worship is often about convenience more than sacrifice until we as Salvationists display the same passion and sacrifice as we once did, maybe it isn't really worship.
Just a thought.
Posted by Captain Collo at 5:31 AM