a Biblical thought...
I'm baptizing you here in the river, turning your old life in for a kingdom life. The real action comes next: The main character in this drama—compared to him I'm a mere stagehand—will ignite the kingdom life within you, a fire within you, the Holy Spirit within you, changing you from the inside out. (John 3:11)

a Book thought... Orbiting the Giant Hairball by Gordon MacKenzie
It is not the business of authority figures to validate genius, because genius threatens authority. (p24) 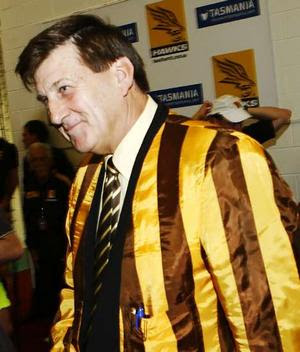 a Dave thought...
Yesterday is known as the biggest day sporting day on the Australian calender - the AFL Grand Final. As Geelong, the unbackable favourite was taking on the up and coming Hawks it certainly had a lot of us sporting addicts intrigued. Well Hawthorn did win, but in more ways than one as I will explain.
I am a big fan of the way Jeff Kennett continually manages to succeed when it comes to vision and action. So when the former premier took over as president of Hawthorn back in 2005 I had a strange suspicion something significant would happen at the club over the next few years. Well true to form Jeff didn't disappoint and through incredible criticism employed an untried coach in Alastair Clarkson. He was also behind the sacking of most of the older players as Jeff explained the hawks would rebuild so they could contest for a flag in 4 years time. Jeff certainly knows how to get things done as during this time he has also instigated their move to Waverley with an amazing new training facility and now he is already casting a vision of 50,000 members in 2009. Jeff is a leader with vision who is willing to take some big hits immediately to build for a better future. Yesterday most applauded the coach and players on the dais as they took the glory and did the hard work on the day, but for me its Jeff's cup.

Just a thought.
Posted by Captain Collo at 5:33 AM