a Biblical thought...
Don't fear: I am First, I am Last, I'm Alive. I died, but I came to life, and my life is now forever. See these keys in my hand? They open and lock Death's doors, they open and lock Hell's gates. (Revelation 1:17)

a Book thought...
The Word is living and active and it happens. Today. (p61 Bell) 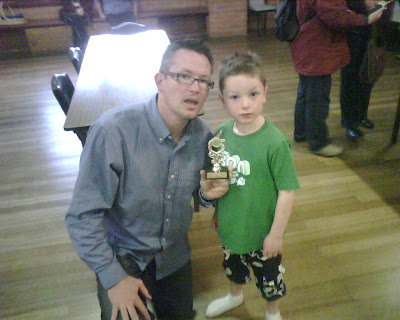 a Dave thought...
On Saturday I went along and participated in my first ever scrabble tournament in Ballarat with Matte Dunn & Matt Kean. It was a long but enjoyable day as we left at 8am arrived by 10am, we then each played six 50 minute games and returned home by 8pm in the evening. Noah came along and was runner, which meant for all six games he took the challenge words to the adjudicator who who would then punch them into the computer and then take the answer back on a printed slip back to the appropriate table. As it was my first tournament I was in division three, and as I won three out of my six games I received the Novice Trophy for my efforts.

It is interesting how some games that you are introduced to as a child stay with you for life. My mum is an avid scrabble player and taught me to play at a very early age, and I have now passed the tradition down to Noah who is now learning the art on his Nintendo DS. It has caused some challenges however. Noah was doing the letter Q in his prep class the other week and wrote the word qi which his teacher was quick to tell him was not a word. Well it was all resolved on the Friday at show and tell when Noah took in our scrabble dictionary and showed her the q words, humbly I hope.

In life many of us get to decide which traditions we pass on in life, faith and in the church. As we make decisions about these and influence people I just pray we choose those traditions worth keeping as we pass them on to the next generation.

Just a thought.
Posted by Captain Collo at 5:24 AM