a Biblical thought...
The King is mighty, he loves justice— you have established equity; in Jacob you have done what is just and right. Exalt the LORD our God and worship at his footstool; he is holy. (Psalm 99:4-5)
a Book thought...
Unlike cowboy tribalism, cosmonaut tribalism permits one to belong to several tribes at once because it does not require you to define your tribalism through hostility to or disrespect for
another tribe. Cosmonaut tribalism means one can be a Tuscan, an Italian, a European and a Planetan (the noun I have chosen to describe a planetist person) at the same time. (p49) 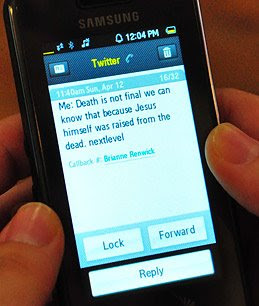 a Dave thought...
In 1896 the Salvos were at the forefront of innovation and technology with the limelight department and roadshows to communicate the gospel in a fresh way.This report from TIME magazine reminds us that we don’t always have to get annoyed by the latest trends and technology on Sunday but rather embrace them to help us connect with God and others.
Voelz and David McDonald, the senior pastors at Westwinds Community Church in Jackson, Mich., spent two weeks educating their congregation about Twitter, the microblogging site that challenges users to communicate in 140 characters or less. They held training sessions in which congregants brought in their laptops, iPhones and BlackBerrys. They upped the bandwidth in the auditorium. (See "Finding God on YouTube.")
As expected, banter flourished. Tweets like "Nice shirt JVo" and "So glad they are doing Lenny Kravitz" flashed across three large video screens. But there was heartfelt stuff too.
"I have a hard time recognizing God in the middle of everything."
"The more I press in to Him, the more He presses me out to be useful"
"sometimes healing is painful"
There's a time and place for technology, and most houses of worship still say it's not at morning Mass. But instead of reminding worshippers to silence their cell phones, a small but growing number of churches across the country are following Voelz's lead and encouraging people to integrate text-messaging into their relationship with God.

Just a thought.
Posted by Captain Collo at 6:46 AM