a Biblical thought...
Better is one day in your courts than a thousand elsewhere; I would rather be a doorkeeper in the house of my God than dwell in the tents of the wicked. (Psalm 84:10)
a Book thought...
If we are to ensure that we create a harmonious, equitable and sustainable society in the year 2050 and beyond we must develop visions, strategies, designs and innovations not just for surviving but for thriving in this new globalising society. (p18) 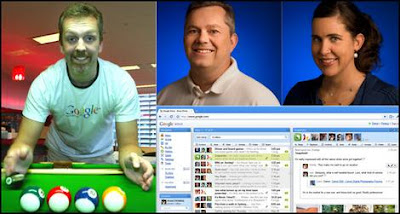 a Dave thought...from The Age
Three Googlers from the Sydney office had just completed a technically challenging, 90-minute demo of an ambitious project with the lofty aim of reinventing online communications.
And as they wrapped up, the crowd almost to a man rose to their feet and gave the team a standing ovation. They liked what they had just seen. And what they saw was what has been called a tipping-point innovation that could rewrite the rules of person-to-person engagement on the internet.
Dubbed Wave, it's the brainchild of Danish-born and now Sydney-based brothers Lars and Jens Rasmussen. It targets email, the internet's dominant communications platform.
As any user will tell you, email has its downsides. There's spam: 90 per cent of email traffic is now classified as unsolicited junk mail. There are emails which just disappear into the ether. There are long threads of replied to and forwarded emails where it is impossibly difficult to work out who said what when.
Wave, say the Rasmussen brothers, is what email would be if it was invented today. It brings multiple communication tools including instant messaging, blogs, wikis and even Twitter under one roof and also combines file and document sharing.

Just a thought.
Posted by Captain Collo at 6:06 AM