a Biblical thought...
The fundamental fact of existence is that this trust in God, this faith, is the firm foundation under everything that makes life worth living. It's our handle on what we can't see. The act of faith is what distinguished our ancestors, set them above the crowd. (Hebrews 11:1-2)

a Book thought...
To truly access God's reality in the ordinary, we need discipline to reorient the way in which we approach life. (p203 Sayers) 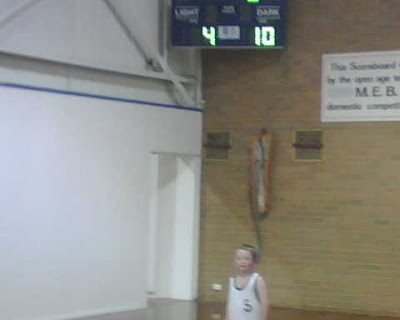 a Dave thought...
At the beginning of the year I spent some time ringing around to find out if my 5 year-old son could play basketball in a team. After a few calls I discovered a program called "Aussie Hoops'' which places children into teams each term and allows primary school kids to experience some form of competitive basketball. Well yesterday it finally happened, after over ten winless games, Noah's team the Kangas had their first win!! 10 - 4 was the final score with Noah scoring all 10 points on the full size rings.

While Kylie & myself were trying to play down the big win after the game, we were both very proud parents and Noah did have a great game. Noah was also very proud of himself and after playing in so many losing games it was great for his confidence to get a win under his belt. So he has learnt already that perseverance pays off, lets hope it sticks.