a Biblical thought...
King Solomon was greater in riches and wisdom than all the other kings of the earth. 23 All the kings of the earth sought audience with Solomon to hear the wisdom God had put in his heart. (2 Chronicles 9:22-23)

a Book thought...
Our effectiveness will come only through authentic biblical conviction and the faith to act on it. (p176) 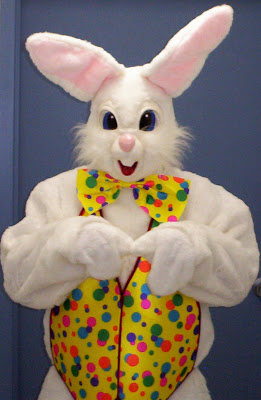 a Dave thought...
The Easter Bunny is very similar in trait to its Christmas holiday counterpart, Santa Claus, as they both bring gifts to good children on the night before their respective holiday. Its origin is disputed but the character was mentioned as early as 1600; some trace it to alleged pre-Christian fertility lore, The claim is that Hare and Rabbit were the most fertile animals known and they served as symbols of the new life during the spring season.

I was interested to know how this tradition began, as this morning Noah & Josiah woke up and found Easter eggs scattered around the house. Kylie has also continued on with her own tradition of buying new PJ's for the boys. It is fascinating how the two biggest days on the Christian calender are used to spoil and distract our children with gifts. Even though Australia is hardly a Christian nation we still all want to celebrate and spend up big on these days. Maybe we should make a rule that you only get to have public holidays at Christmas and Easter if you attend church every week:)

Just a thought.
Posted by Captain Collo at 8:03 AM