a Biblical thought...
Josiah removed all the detestable idols from all the territory belonging to the Israelites, and he had all who were present in Israel serve the LORD their God. As long as he lived, they did not fail to follow the LORD, the God of their fathers. (2 Chronicles 34:33)

a Book thought...
My prayer is that the followers of Jesus Christ would walk through life demonstrating a surprising lack of fear and great humility and courage. (p232) 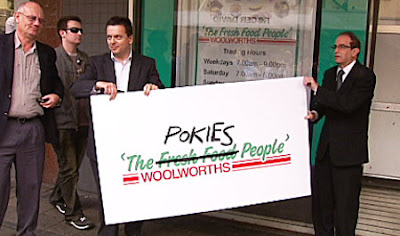 a Dave thought... from abc.net.au
Independent Senator Nick Xenophon says Woolworths' gambling interests are harming families.
He says Woolworths owns about 11,000 poker machines and hundreds of gambling venues across Australia.
Senator Xenophon says the retailer should divest its gambling interests because of the risk to children.
"Being exposed to gambling promotions, gambling products, that is a bad sign of things to come in terms of being influenced by that," he said.
"And when you consider that these venues are so-called family-friendly, there are children's playgrounds right there in the middle of these poker machine venues.
"I think it is very inconsistent with Woolworths' image."
World Vision CEO Tim Costello also has condemned Woolworths' role in the gambling industry.
"This is scripting the next generation. The industry wants to devour the next generation because they lose their gamblers to crime and bankruptcy and their businesses and homes going," he said.
"So they've got to target kids. And kids may never do what parents tell them, but kids always do what parents do."

Just a thought.
Posted by Captain Collo at 6:06 AM