Bands in the Round

a Book thought...
During the two years (1896-97) of Herbert's Manifesto campaign in Australasia people recorded as having attended indoor meetings was twenty-seven million eight hundred and sixty-six thousand, of whom forty-six thousand had knelt at the penitent-form, fifteen thousand of whom were enrolled as soldiers. (p166) 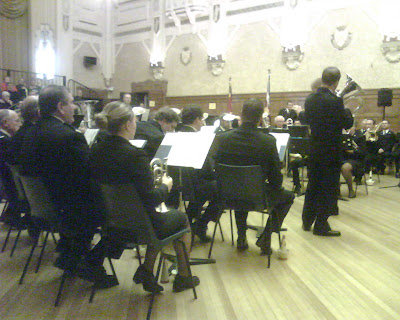 a Dave thought...
Last night I attended the Bands in the Round event held at Northcote Town Hall. It was a unique way to let five bands perform and also rare opportunity for them to get to hear each other. The Salvation Army bands on show were Box Hill, Waverley, Camberwell, Ringwood and the MSB. The venue was configured so you could literally sit anywhere around the outside of the performing band without formality of a normal concert. As each band played for twenty minutes you could also sit around the band or in the adjacent room and have a latte and a snack or check out numerous displays. So to Ken Waterworth and his team 'well done' on using this medium in a new and interactive way.

Just a thought.
Posted by Captain Collo at 5:41 AM

Nothing 'new' about it. Preston band organised these 10 years ago.