a Biblical thought...
Show me your ways, O LORD, teach me your paths; guide me in your truth and teach me, for you are God my Savior, and my hope is in you all day long. (Psalm 25:4-5) 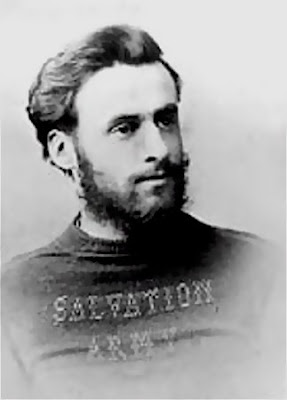 a Dave thought...
Last night I went along to Camberwell for the Historical Society's night on Herbert Booth. This pioneer has always been my favourite Salvation Army personality and as I learnt a little more about his life the more I am inspired but also saddened.
Herbert Booth took command of all Salvation Army operations in the British Isles when he was 26. Then, from 1892-1896, he was the Commandant for the Salvation Army in Canada. Next, he was appointed to the Australasian Territory where his health continued to deteriorate. During the 5 years he was in charge of Australia and New Zealand from ages 34-39 he established 101 buildings with the army growing at an incredible rate. His innovations were numerous with the Limelight Department one of the worlds first film studios producing over 300 films and other initiatives such as the bicycle brigade where he made it compulsory for every centre to own two bikes so time could be used more efficiently. Upon arrival in 1896 to Australia he issued a Manifesto which begins with these words...
My dear comrades, I want to charge and challenge you to be people of vision. The Bible says that where there is no vision the people perish. Certainly, without vision The Salvation Army will perish - and when I speak of the Army I don't merely think of people on headquarters. I mean all of us, regardless of our age or rank. We need to be visionaries.
His farewell meeting in 1902 was attended by every leading MP and many other important community leaders in Australia, such was his amazing influence in this country. Sadly he left the movement as he struggled with a system where all the major decisions were made in London.
Just a thought.
Posted by Captain Collo at 8:36 AM

Thanks for this tribute. Herbert is also my favourite Primitive Salvo. What exciting years 1896-1901 must have been! Yet these are also exciting years years to be a Salvo in AUS!