a Biblical thought...
Peter sent them all out of the room; then he got down on his knees and prayed. Turning toward the dead woman, he said, "Tabitha, get up." She opened her eyes, and seeing Peter she sat up.

a Book thought...
Every local congregation should have a unique flavour based on the sometimes quirky mix of gifts, passions, and life experiences of its members. (p91) 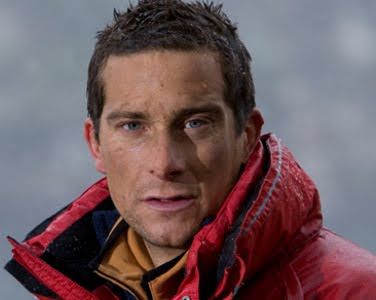 a Dave thought...
Man vs. Wild star Bear Grylls stopped by a Florida prison this week to tell inmates about the one survival tool he can't live without: his faith.
During a visit Thursday to the Tomoka Correctional Institution in Daytona Beach, the British adventurer, who has eaten animal eyeballs and camel intestines and confronted some of the world's most poisonous snakes on his popular Discovery Channel show, said his relationship with Christ is what gives him strength.
"I risk a lot to do this stuff, but I've been given a really privileged platform where people know the show. I want to do something good with that," he told roughly 160 inmates gathered for a chapel service. "And that's really why I'm here. I want to say this [faith], deep down, is what strengthens me. It helps me in the difficult places. [And] it's not exclusive."
The talk is one of two appearances he made this week as a spokesman for the Alpha course, a Christian discipleship program developed at the charismatic Holy Trinity Brompton church in London. Grylls also spoke Wednesday night during the annual conference of the ministry's U.S. branch.
Grylls said attending an Alpha course several years ago with his wife, Shara, gave him a chance to ask some big questions about God and His plan for humanity. "Alpha was a really good excuse to ask these questions," he said. "It was kind of low-pressure and easy and it was fun."
As a child, he said he never questioned the existence of God. "I had a really natural faith in God," he said. "I knew God existed. I never asked. I just knew. I felt loved, and it was there. But I lost it."
He met Christians as he grew older, but they seemed judgmental and boring. "I thought, I don't want that," he said. "And I walked right away from it."
He thought his life was OK until his teen years when some close friends suddenly abandoned him. "It's so easy to be brave when everything's OK," he said. "That's another big lesson I've learned. Real bravery is about when it's not going OK."
Sitting alone, he wondered where was the God he knew as a kid, and he began to pray. "I want that same faith and that same friendship and that same relationship and that same freedom again," he said. "If You're there, will You be that friend to me again? Amen."
"And then that was the end of the prayer. Little did I know, actually, that is the prayer. Everything else, really, is academic. That's the prayer: Be my best friend."

Grylls said his faith journey remains a rocky road, "full of struggles and doubts and challenges." But he said he clings to two Scriptures: Psalm 73:23, "You hold me by my right hand," and Philippians 4:13, "I can do all things through Christ who strengthens me" (NKJV).
"We make everything so complicated and so theological and so smart and so together and so confusing," he said. "Actually, all that matters is, I'm holding you by your right hand, and I can do everything with Christ. And that's, for me, is what holds me a lot on mountains when things are going wrong. ... It's what holds me when I'm struggling with my faith and doubts."
An Alpha course will soon launch in the Tomoka prison, and Grylls asked inmates who participate to e-mail him their stories.
"Because that's what motivates me," he said. "It's amazing when I hear the stories. It happens all the time-amazing stories of lives turned around, people finding that simple, simple faith that says, ‘I'm home and I'm held and I'm forgiven.' I've seen the toughest people in the world have their lives turned around."
Does he ever bargain with God when he's caught in a sticky situation? one inmate asked. "I'm a heavy bargainer," he said. "That's all right. The great thing is we have a God who doesn't tire of that. The more He gives, the more He likes to give, so keep asking."

I agree with Bear Grylls - I am currently doing an Alpha course and it has provided a freedom to question things you may otherwise be too afraid to ask or not know how or who to ask. One of the best things about Alpha is experiencing not only your own, but other peoples' journeys and hopefully providing and gaining some inspiration along the way. Go God!!
Lindsey