a Biblical thought...
Jesus answered, "My teaching is not my own. It comes from him who sent me. If anyone chooses to do God's will, he will find out whether my teaching comes from God or whether I speak on my own. He who speaks on his own does so to gain honor for himself, but he who works for the honor of the one who sent him is a man of truth; there is nothing false about him. (John 7:16-18)

a Book thought...
I do a great deal of listening. Prayer is not meant to be a monologue, but a dialogue. (p185) 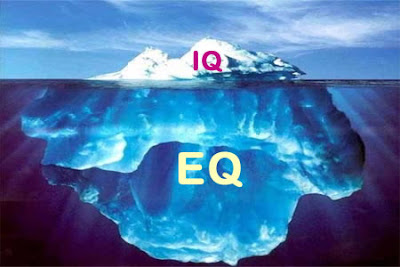 a Dave thought...
Yesterday I came across some papers where the Emotional Intelligence (EQ) of an individual was being assessed. This prompted me to read up on what is all about. Also if you want to do a free online test go to http://http//www.queendom.com/tests/access_page/index.htm?idRegTest=1121
For decades, a lot of emphasis has been put on certain aspects of intelligence such as logical reasoning, math skills, spatial skills, understanding analogies, verbal skills etc. Researchers were puzzled by the fact that while IQ could predict to a significant degree academic performance and, to some degree, professional and personal success, there was something missing in the equation. Some of those with fabulous IQ scores were doing poorly in life; one could say that they were wasting their potential by thinking, behaving and communicating in a way that hindered their chances to succeed.
One of the major missing parts in the success equation is emotional intelligence, a concept made popular by the groundbreaking book by Daniel Goleman, which is based on years of research by numerous scientists such as Peter Salovey, John Meyer, Howard Gardner, Robert Sternberg and Jack Block, just to name a few. For various reasons and thanks to a wide range of abilities, people with high emotional intelligence tend to be more successful in life than those with lower EQ even if their classical IQ is average.
Just a thought.
Posted by Captain Collo at 6:14 AM