a Biblical thought...
"My kingdom," said Jesus, "doesn't consist of what you see around you. If it did, my followers would fight so that I wouldn't be handed over to the Jews. But I'm not that kind of king, not the world's kind of king." (John 18:36)

a Book thought...
Holiness mobilises. It sends us into action. It doesn't simply hold us back from sin... it sends us out to do greater things. (p189 Munn) 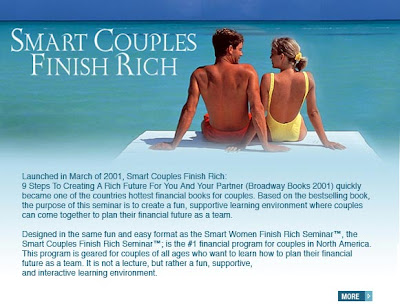 a Dave thought... The Sunday Age
Singleton, a senior lecturer in sociology at Monash University, argues young people are most likely to adopt their parents' beliefs or lack of them, rather than forge their own spirituality. "Generation Y are to a great degree fairly godless, but it is really reflecting their parents and the society in which they have come of age," he says. "They believe in themselves, they believe in their iPods, they believe in their friends, they believe in shopping.
"But really, it's not their fault. Look at their baby boomer parents attending antique fairs and buying up caravans and houses at Ocean Grove and spending all their money on consumer activities. Their parents are doing it in spades, so why not them?"
I believe that parents of Generation Y, the Baby Boomers certainly have something to answer for. There is no doubt in my mind that many cashed up parents have surrounded their children with massive amounts of consumerism without thinking through the consequences. Even as I parent Noah, (nearly 6) I realise how every time we go to the shops he believes he has a right to ask for what he wants and that if we don't have cash he says "just buy me this lolly on credit Dad!" So with their iPods, mobile phones, TVs and PCs often in their own rooms really why do they need God? Then again with parents more and more putting their dreams and purchases before God's, maybe Gen Y is just a product of a selfish society.
Just a thought.
Posted by Captain Collo at 6:00 AM

You might find our program to be a helpful tool for parents!

It is currently being used in day care, Kindergarten, 1st grade, Children’s ministry, various counseling outlets, a library district in eastern WA, and Portland Parks and Rec, YWCA-Vancouver is reviewing and testing now!

The story of Hur-Ray and Kiddazy® provides a full-color picture book and puppets that are a fun and innovative way to bring imaginations to life. Role-play discussions build self-esteem and explore awareness with Kiddazy® and Hur-Ray. What a wonderful way for your child to learn that he or she is special! Children blossom when they know parents are always there to cheer them on and be supportive.

Through interactive play, children develop important foundational skills to enhance and refine their natural inclination to imagine and use this special ability as a powerful vehicle for developing language and creativity resulting in a positive self-concept. This gives them self-confidence, and successful images.

Self-esteem is as important to children as the air they breathe, this program helps parents, big sisters and brothers, even aunts, uncles and grandparents foster an atmosphere in which self-esteem can flourish.

YYOL teaches all to find the inner “cheer” leader so you and your child end up feeling better about yourself and stronger inside. You'll teach them positive ways to deal with strong feelings like anxiety and fear. And you'll discover the “YEAH YEAH” message and communicate to them the times when they’ll need it most!.