a Biblical thought...
There are so many other things Jesus did. If they were all written down, each of them, one by one, I can't imagine a world big enough to hold such a library of books. (John 21:25)
a Book thought...
In our call to a holy revolution, we call you to defend the rights of the poor, to look after the orphans and widows, and to sell your possessions. This is part of total surrender, obedience and passion for the Lord. (p201 Munn) 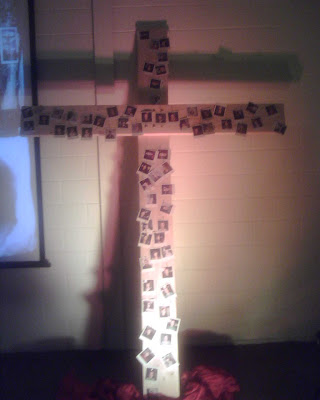 a Dave thought...
This picture was taken from the Eastern Vic Divisional Youth Good Friday meeting held at Mitcham last night. It was a very moving time as we worshipped and reflected and were greatly challenged as Matt Kean shared his views on Peter with us. The message asked the question "what good are you to Christ?" We were asked to if we would be willing to stand up for Christ, be beaten for Him, spat on for Him or are we just content to be saved. True discipleship means giving your all no matter the cost, and even though Peter failed when things got tough at the crucifixion, he from that moment on was certainly not only a believer but also a disciple. During the response time we were then asked to come forward with a picture of yourself (taken on the way in) and if we are willing to deny ourselves to hammer our picture on the cross as sign of our commitment. It was awesome to see so many youth totally sold out and taking on this call whatever the cost.

Just a thought.
Posted by Captain Collo at 11:06 AM