a Biblical thought...
Live in me. Make your home in me just as I do in you. In the same way that a branch can't bear grapes by itself but only by being joined to the vine, you can't bear fruit unless you are joined with me. (John 15:4)

a Book thought...
William Booth advised that your consecration must keep pace with your God's revelation. If it doesn't you fall behind the Holy train. Or, you don't testify to your experience. (p177 Court) 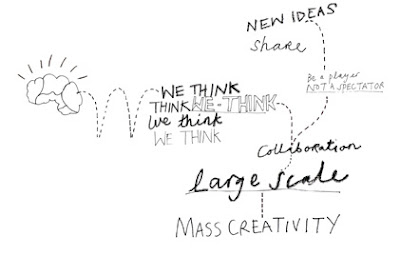 a Dave thought...
We Think explores how the web is changing our world, creating a culture in which more people than ever can participate, share and collaborate, ideas and information.
Ideas take life when they are shared. That is why the web is such a potent platform for creativity and innovation.
It's also at the heart of why the web should be good for : democracy, by giving more people a voice and the ability to organise themselves; freedom, by giving more people the opportunity to be creative and equality, by allowing knowledge to be set free.
But sharing also brings with it dilemmas.
It leaves us more open to abus and invasions of privacy.
Participation is not always a good thing: it can just create a cacophony.
Collaboration is sustained and reliable only under conditions which allow for self organisation.
Everywhere we turn there will be struggles between people who want to freely share - music, films, ideas, information - and those who want to control this activity, either corporations who want to make money or governments who fear debate and democracy. This conflict between the rising surge of mass collaboration and attempts to retain top down control will be one of the defining battles of our time, from Communist China, to Microsoft's battle with open source and the music industry's desperate rearguard action against the web.

We-think by Charles Leadbeater is a new book on its way, you can download the first three chapters as pdfs @ http://www.wethinkthebook.net/book/home.aspx It certainly grabs my attention as I am finding the web has had a massive influence, on the way I read, minister, communicate and I don't think we realise it but it is changing The Salvation Army. We can no longer wait to release international news when we are ready as it has already been posted somewhere else in the world. The sooner we embrace rather than resist the moves to facebook, blogs & web ministry the better equipped we will be for the future. The world is moving ahead fast I hope we get on board.

Posted by Captain Collo at 1:54 PM