a Biblical thought...
"If any of you wants to serve me, then follow me. Then you'll be where I am, ready to serve at a moment's notice. The Father will honor and reward anyone who serves me.” (John 12:26)

a Book thought...
Keep pursuing, following, chasing after, hunting, for, and tracking down holiness. And even if you have selfish motives – once you get holy, that will be taken care of, so it’s still worth going after. (p158 Munn) 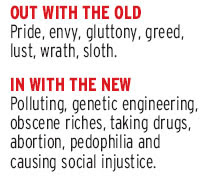 a Dave thought...
As the seven ancient wonders of the world were matched by seven modern wonders, the seven deadly sins have been given a modern version for a globalised world, announced by a Vatican official yesterday.
Polluting, genetic engineering, obscene riches, taking drugs, abortion, pedophilia and causing social injustice join the original seven deadly sins defined by Pope Gregory the Great in the sixth century: pride, envy, gluttony, greed, lust, wrath and sloth.
Gianfranco Girotti, head of the Apostolic Penitentiary, responsible for absolving Catholics from their sins, named the new mortal sins in an interview with the Vatican newspaper, L'Osservatore Romano, yesterday.
He did not spell out details but said the original seven deadly sins had an individualistic dimension, while the new seven had a social resonance and showed worshippers that their vices affected other people.

Full credit to the Catholics for updating some of their original documents, this latest version certainly makes more sense in an era of globalisation. It is interesting how these are not about personal Christian living standards but more aligned to a Kingdom approach where we need to look out for others. Perhaps us Salvos can take the Catholics lead and update some of our earlier writings, such as the Soldiers Covenant.

Just a thought.
Posted by Captain Collo at 5:58 AM