a Biblical thought...
The LORD is exalted, for he dwells on high; he will fill Zion with justice and righteousness. He will be the sure foundation for your times, a rich store of salvation and wisdom and knowledge; the fear of the LORD is the key to this treasure. (Isaiah 33:5-6)

a Book thought...
Keep away from people who try to belittle your ambitions. Small people always do that, but the really great make you feel that you, too, can become great. (Mark Twain) 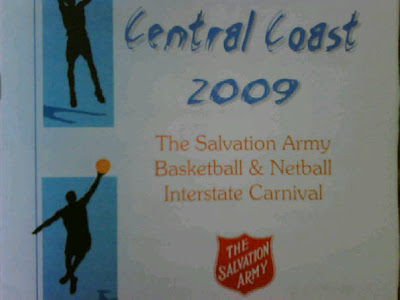 a Dave thought...
Last night we arrived in Terrigal, NSW for the beginning of The Salvation Army Basketball & Netball Carnival. At 4.30pm a small representation met for the annual AGM where we confirmed that Carnival 2010 would be held in Geelong and 2011 in Perth. At 6pm at Gosford Salvos we had the church parade where the 300 participants gathered for a 1 hour service followed by 100 pizzas for tea. It is going to be a fun week with 36 teams participating overall for the 5 days. Made up from 3 teams from the ACT, 1 from the NT, 1 from Queensland, 6 from SA, 18 from Sydney, 2 from Tassie, and 5 from WA. I'm pulling the boots on again for South Australia B Grade and confident that the week will be more than just sport. These times often build strong relationships and can be the start of lifetime with God, pray that this will be so.

Just a thought.
Posted by Captain Collo at 8:31 AM

Will next years carnival be in our school holidays? Good luck Dave....